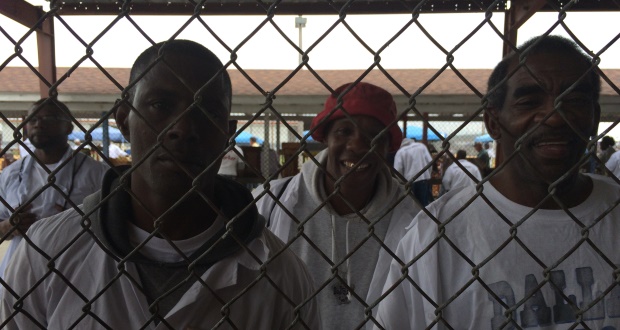 RUTH HOPKINS reflects on how language can impinge on a personâ€™s dignity and why itâ€™s important to consider the meaning and impact of the words we use in the service of justice.

A few days after I arrived in New York, to start a criminal justice reporting fellowship, I emailed Johnny Perez, an advocate for the mental health project at the Urban Justice Center, a legal aid and social justice organisation based in the city. Not only does Perez do a lot of work at the troubled Rikers Island, the sprawling prison complex located on an island wedged between the New York boroughs of Queens and the Bronx, he also spent a fair amount of time in prison himself.

Rikers Island is an embattled facility that has courted controversy and fallen into disrepute, following reports of widespread violence, disease, corruption and outdated architecture. It reminds me in many ways of Pollsmoor prison in Cape Town.Â Recently, a commission was founded to explore possible solutions to the plethora of problems afflicting Rikers. A groundswell of consensus seems to have formed around the idea of closing the jail.

Perez had previously spoken about the three years he spent in solitary confinement at an event I attended, and I was struck by the suffocating intensity of his experience. In my email, I asked him if he knew of any current or former inmates who would be willing to talk about their experiences at Rikers and their ideas on what kind of changes they want to see take place at the prison complex. We too often speak about certain groups, without speaking with them.

Perez wrote back:Â â€œAs advocates we try to stay away from dehumanizing language and try to use language which upholds the dignity of the person. For this reason we refrain from describing people as inmates, and refer to them as people: formerly incarcerated people, presently incarcerated people; person convicted of a crime, etc.â€

So what does the word “inmate” connote? Up until the 1920s, it referred to lodgers at boarding schools, seminaries and institutions. It could simply mean the resident of a house. Over time, it came to be associated with lodgers in asylums, prisons and hospitals and nowadays is commonly known to refer to a person incarcerated in a correctional facility. In the United States (as in many other countries), the word inmate often means a hostile takeover of the rest of your role and place in the world. It obliterates what you were or hoped to become. In addition to the obvious loss of freedom of movement, incarceration in the US means you will lose a basic democratic right to vote. Due to harsh mandatory minimum sentences, people might end up behind bars for years on end for relatively simple offences. Additionally, a criminal record often turns out to be a life sentence, effectively barring people from finding work, voting and eligibility for food stamps and other social benefits.

The use of the word inmate has never been an issue at the Wits Justice Project. We randomly and repeatedly refer to people behind bars as inmates. Initially I didnâ€™t take Johnnyâ€™s remark that seriously, but it stayed with me and sank in. Prison is dehumanising and words can stigmatise.

Take for example Victor Nkomo. In 2005, he was arrested for a casino heist that had taken place at his workplace in Montecasino. Nkomo claims the police officers threatened and tortured him in the hope of finding out who had masterminded the heist. Frightened by the violence, Nkomo left for Zimbabwe after he was released on bail. When he returned in 2006, he cooperated with the police when they told him he was still a suspect. The only evidence against Nkomo was contained in the statement of a police officer, who said that an unnamed woman was found in possession of the stolen money and that she had blamed Nkomo.

This flimsy evidence kept Nkomo in the awaiting trial section of Sun City jail for nearly eight years and earned him the dubious title of â€œlongest awaiting trial detainee in the country“. His lawyer appealed his criminal case, but also challenged his unconstitutionally lengthy detention, before several courts. As he was getting ready to appeal to the Constitutional Court, the prosecution service offered Nkomo a deal: if he pleaded guilty to a lesser charge, he would receive a suspended sentence and he would be a free man. Tired of the overcrowded, dirty and gang-ridden communal cells in Sun City and of not seeing his son grow up, Nkomo accepted.

So now Nkomo is no longer an inmate. He is back in his hood, Hillbrow, trying to eke out a living.

In South Africa, the consequences of having a criminal record are a little less draconian than in the US, but it still has limiting effects on the labour market and other social spheres. It can become a “civil disability“, meaning the punishment for an offence can last much longer than the sentence imposed; it becomes a debt to society that cannot be repaid.

Being called an ex-offender or former inmate is all the more unacceptable for Nkomo, who was presumed guilty before he could even prove his innocence.

As a journalist, I canâ€™t always use the language I prefer. Word counts throw a spoke in the wheels, as does the need to use language that is commonplace or commonly accepted. So I doubt that I will never use the word inmate again. But at least my awareness has been raised; and through this blog, hopefully, yours has too.

Ruth Hopkins of the Wits Justice Project was awarded the Sylvester Stein Fellowship and used it to conduct research in the United States and to compare criminal justice issues in South Africa and the US, analysing how race, demographics and the unequal distribution of wealth affects the systems in both nations. This is the first instalment of a six-part blog series for the Daily Vox.