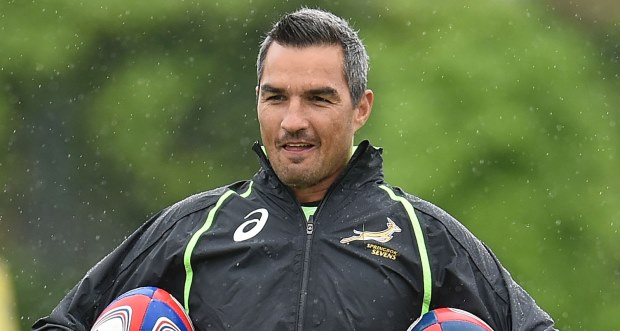 SA rugby Sevens Coach Neil Powell had a selection quandary to deal with as he had to make a final decision on which players he will be taking to the Rio Olympics. The team was announced last week, and Powell managed to cutÂ his squad of 19 players to a dozen. But it wasn’t easy for him, as he explained to The Daily Vox.

Powell had a hard time choosing which players he wanted to take to Brazil, since he had seasoned Sevens players like Kyle Brown and Cecil Afrika, as well as a host of Springbok players like World Cup winner Bryan Habana, Francois Hougaard and Juan de Jongh to pick from.

Habana started his international rugby career on the Sevens circuit when he made his debut in the 2003-2004 season. He then made his Springbok test debut against England at the end of that year and he has never looked back. Despite these credentials his missed the cut.

He wasnâ€™t the only major casualty as veteran Frankie Horne also failed to secure his place in the Olympic squad.

â€œThis has been the toughest team (I have had to choose); a lot of headaches as to who to select. It was basically three days of thinking about it non-stop. There were discussions and debates about whom can we select and who can we leave out.â€

Powell says the players who missed out must not think they are inadequate.

â€œI told them, itâ€™s not because they not good enough. Unfortunately we can only take 12 players and I know if we do pick up injuries then one of those guys needs to come into the team, they will able to fulfil that role in the team.â€

South Africa play their first match against Spain. The Spaniards beat Samoa to book their place at the Games, and Powell says they all know there is no such thing as an easy draw.

â€œOn the day, any of those teams can beat you if you arenâ€™t up for that game. We respect all three of those teams and know we cannot underestimate them, not even Spain. They sneaked in the back door to qualify by beating Samoa.”

He added, â€œBy beating Samoa they (Spain) showed that they are a quality team and that they can beat anybody on the day.â€

The Blitzboks have experience on the international stage and a title to go with as they won gold at the Commonwealth Games two years ago.

However, Powell thinks that wonâ€™t account for much in their bid to bring home an Olympic gold medal.

“There is no golden recipe that you can do in every single tournament and it will work for you. You have to start all over again and make sure you are happy when you play that first game against Spain. [You must be] Happy that you preparation has gone well, happy that you confident and that your players are in form to be successful over the three days.â€

The last time rugby was played at the Olympics was at the 1924 Summer Games in Paris. Ninety-two years later, the Blitzboks will be hoping to replace the USA as the gold medal holders of this code.