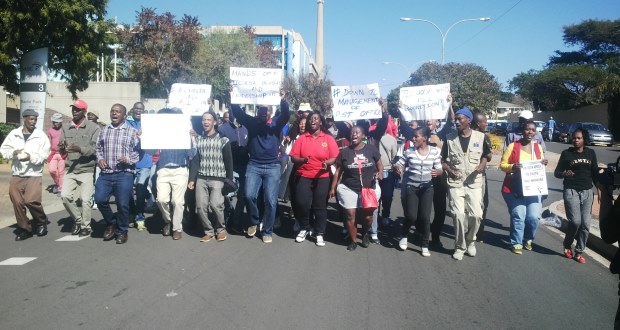 The recent editorial shakeup that has been taking place at the SABC is a very serious issue, with the media freedom of the public institution being threatened. Journalists have been censored by the banning of showing violent protest and the threat of suspension and dismissal hanging over their heads. However through all this, there have been a number of brave journalists from the SABC who have spoken out against Hlaudi Motsoeneng and the recent editorial decisions being made at the public broadcaster.

1. Three SABC journalists were suspended after they ostensibly contravened the dictates of the broadcasterâ€™s embattled COO, Hlaudi Motsoeneng. They are editor Thandeka Gqubule, RSG executive producer Foeta Krige and Afrikaans news producer Suna Venter. The trio was not given reasons for their suspension but it is suspected that their suspension is the result of them raising concerns about the lack of coverage of the Right2Know protest that took place outside the SABC building. The three journalists are expected to take the SABC and Motsoeneng to the Constitutional Court to seek legal redress over their suspension.

2. Three more SABC employees, executive producer (EP) of Special Assignment Busisiwe Ntuli, EP of current affairs, Krivani Pillay and investigative reporter Jacques Steenkamp haveÂ written a letterÂ Â being circulated on Twitter. In it, they express concern over the suspensions of the abovementioned journalists and ask for a meeting to get clarity on the issues. It is unconfirmed whether their letter has been responded to.

3. On Tuesday, the group acting CEO of the SABC, Jimi Matthews resigned from the SABC saying that what has been taking place at the SABC is wrong and he could not be a part of it any longer. His resignation letter was published on his personal Twitter account. The SABC board addressed the resignation saying they would have preferred for Matthews to have taken them into his confidence.

4. Lukhanyo Calata, the son of apartheid struggle hero, Fort Calata who was killed by the apartheid police, has also spoken out against the SABC. Calata, who works as a parliamentary reporter for the public broadcaster said in an interview with the Cape Argus that what the SABC is doing is trampling on the struggle of the many people including his father who died during Apartheid fighting for media freedom amongst other things.

5. Sakina Kamwendo, a presenter on the SABCâ€™s Forum at 8 hosted Motsoeneng and spokesperson, Kaizer Kganyago on June 8th to speak about the SABCâ€™s controversial decision. Even though Kamwendo was allowed to ask questions freely, one listener pointed out that she should be careful because her probing questions could result in her being out of work. This showed that even the listeners could see the implied threat that was there for journalists and SABC employees who might be speaking out against the broadcasterâ€™s new policies.

Meanwhile, Motsoeneng has claimed that there is no censorship at the SABC and that despite the resignation of Jimi Matthews, there are no problems at the SABC and the majority of the SABCâ€™s employees do not have any problems. However, he has been quoted as saying that journalists have to adhere to the policy of the organisation and if they didnâ€™t they should â€œmove before we come to you.â€

Considering the way Hlaudi has been talking about the editorial policy as well the various â€œthreatsâ€ he has made to journalists, it is truly brave and commendable that the journalists of the SABC are speaking out against these polices even though their livelihoods are on the line.

Proud of the resolve of SABC journalists. They must be supported.

Journalists are also planning on marching to the SABC offices in Auckland Park to protest against the SABC on Friday morning. They are expected to be joined by SABC staffers as well.