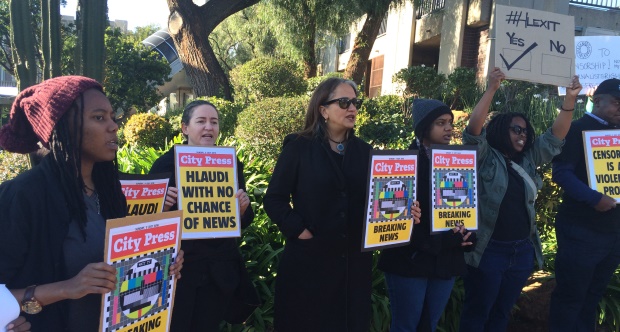 Who is Hlaudi Motsoeneng anyway?

He hails from QwaQwa in the Free State and his meteoric rise through the ranks of the public broadcaster began in the late 1990s when he worked as a freelance reporter for Lesedi FM.

He continued to work at Lesedi FM, amassing more influence over the stationâ€™s operations, eventually moving to Johannesburg, where he now serves as the SABCâ€™s Chief Operating Officer (COO).

Fun fact: Hlaudi was once fired from the SABC

Speaking to the Sunday World last year, Motsoeneng said he was fired by the SABC in 2007 following a disciplinary hearing.

“I was labelled a racist and told that I don’t have respect after they asked me to apologise,” Motsoeneng said. “I refused and stood my ground.”

According to Motsoeneng, he lost his job after he had re-allocated company cars to black freelancers – who worked in the wee hours of the morning – and for authorising overtime pay for them.

“They asked me about it. I told them they were all people and deserved to be treated the same way as white journalists,” he said. “But they told me I was racist and not remorseful. I was then fired.â€

Motsoeneng had a short stint in communications in the Free State provincial government but was soon lured back to the public broadcaster. “I was recruited back to the SABC within a year,â€ he said.

So how did he become the mkhulu boss at the SABC?

By this account,Â Motsoeneng is rumoured to have been â€œconnected to powerful politicians and was using these links to advance his careerâ€.

And according to the Financial Mail, Motsoeneng has repeatedly â€œbragged to colleagues of his links to President Jacob Zumaâ€.

Okay, but heâ€™s qualified for this job, right?

In 2014, a report by the Public ProtectorÂ revealed that Motsoeneng did not even have a matric certificate and had in fact fraudulently fabricated his academic qualifications. His legal team blamed the person who hired Motsoeneng about 20 years ago, saying that the person had not checked Motsoenengâ€™s credentials because he had not actually lied.

He was also found to have given himself numerous salary increases in one year, with the support, it seems of the SABC board at the time.

The Public Protectorâ€™s remedial actions were ignored though, when the high court found them not to be binding in 2014. Although there is the minor issue of the Constitutional Court ruling this year that the Public Protectorâ€™s remedial action is binding (by the way, in the hierarchy of South African law, Constitutional Court > high court), but thatâ€™s a fight for another day.

Motsoenengâ€™s been keeping his legal team on its toes with his numerous attempts to keep his job, despite overwhelming evidence that he really shouldnâ€™t be there. In November 2015, the Western Cape high court found his appointment to be irrational and ordered that it be set aside. The SABC tried to appeal that ruling, and lost the application in May this year. But he wonâ€™t back down, with his legal team now taking the appeal to the Supreme Court of Appeal. And through the rising legal costs, Motsoenengâ€™s cushy seat at the SABC remains firmly filled by him.

So, Hlaudiâ€™s mere presence at the SABC is in contempt of court?

So does everyone at the SABC support Hlaudi?

Last year, there was a new controversy when Hlaudi sold the SABCâ€™s archives to Multichoice. Three board members were axed in the shadow of that controversy, and one of those board members, Hope Zinde, said she was removed from the board particularly because she questioned Motsoenengâ€™s leadership of the public broadcaster.

This report from IOL shows that Zinde said in a letter that she had told Communications Minister Faith Muthambi at a meeting that Motsoeneng was â€œa stumbling block to the boardâ€™s ability to perform its dutiesâ€.

â€˜At that meeting. Zinde said she also told the minister that she objected to the manner in which Motsoeneng was appointed. She quoted Muthambi as replying: â€œBut Baba loves Hlaudi, he loves him so much, we must support him.â€â€™

Alright, but what does a Hlaudi-shaped SABC actually look like?

In 2013, he spoke of imposing a 70% â€œsunshine newsâ€ quota at the SABC to show â€œpositive newsâ€ about SA and to get away from â€œall this negative stuffâ€.

Heâ€™s also the reason we have more local jams on our radio, no?

Earlier this year, Motsoeneng was hailed for the introduction of increased local content quotas on SABC radio and television properties.

So, Hlaudi is not all inclement weather (Sorry, we couldnâ€™t resist slipping in at least one Hlaudi pun).

When it comes to the money side of things, how has Hlaudi fared in keeping the SABC afloat?

Well, financial mismanagement was one of the reasons Thuli Madonsela investigated Hlaudi and the SABC in the first place. In her 2014 report, she found that Hlaudi â€œhas been allowed by successive Boards to operate above the law, undermining the GCEO [group CEO] among others, and causing the staff, particularly in the human resources and financial departments to engage in unlawful conduct.â€

Weâ€™ve mentioned the numerous salary increases that Motsoeneng helped himself to in one year, but he also played an instrumental role in unprocedurally sacking SABC staffers. They then sued the SABC for unlawful suspensions and terminations, and the SABC spent an additional R29 million in settlements and legal fees – or â€œfruitless and wasteful expenditureâ€ in the words of the Public Protector.

According to the Financial Mail, when the SABC releases its financial figures in August, itâ€™s likely to report its sixth financial loss in ten years.

And whatâ€™s the latest noise surrounding Hlaudi about?

It began in January this year when changes to the SABC saw editorial power being vested in Hlaudi. The problem with this? The suits at a media organisation should not be the ones to make editorial decisions. Itâ€™s as true for the SABC as it is for any other media organisation.

Which brings us to the current impasse:

Recently, there were huge editorial changes at the SABC ordered by Motsoeneng which included, amongst others, the banning of broadcasting violent images on SABC news.

The Independent Communications Authority of SA (Icasa) even ruled that the SABC must justify their ban on violent footage, saying that the decision was in conflict with the role that the public broadcaster was supposed to play as has been outlined in the Constitution and Public Broadcasting Act.

The corporation was given a week by Icasa to abide by the ruling to stop the ban on violent protests, and later reached a court settlement with the Helen Suzman Foundation to stop the editorial policy. They also wrote to Icasa saying that they will abide by its ruling (after initially saying they would take it on review).

And how do SABC staff figure here?

The policy meant that journalists were censored from speaking through the ban and more controversy emerged from this when several SABC employees who began to speak out against these policies were charged with misconduct, suspended and later fired.

The eight SABC journalists who were fired from the SABC revealed in documents that they had filed in the Constitutional Court that Hlaudi Motsoeneng had also told staff that they could question anyone from the ruling party, with the exception of the president of South Africa, whom he said deserved respect and more time.

It looks like the SABCâ€™s lawyers arenâ€™t getting a break anytime soon: all of the fired journalists are tackling their dismissals by way of the Labour Court, as well as approaching the Constitutional Court to decide whether the editorial policy, and their dismissals, are lawful and in line with the constitution.

Is anyone actually calling for Hlaudi to go?

The SACP – a member of the ruling tripartite alliance – have now joined the ranks of many other journalists and civil society in calling for the removal of Motsoeneng from office. But considering how much time, energy and money Hlaudi’s already pumped into staying in charge, it’s questionable whether that will happen anytime soon.