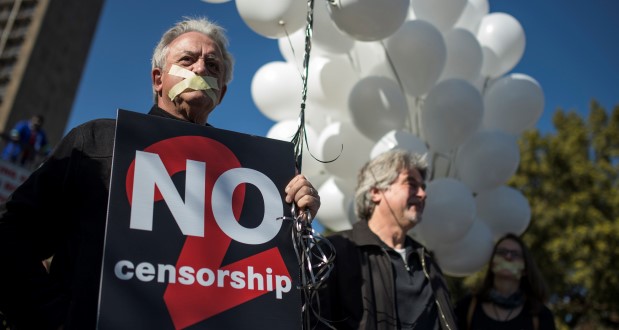 On Friday, members of the media and civil society staged a protest outside the SABC’s offices in Auckland Park, Johannesburg. They were protesting the recent editorial decisions made by COO Hlaudi Motsoeneng, as well as calling for the suspended SABC journalists to be reinstated. THE DAILY VOX TEAM asked a few protestors why they were there.Â Sekoetlane Phamodi, 28, national coordinator of Save our SABC (SOS Coalition), Johannesburg
[dropcap]â€œ[/dropcap]At the moment it is operating as a de facto state broadcaster. The SABC has almost been entirely captured by the ruling elite. We know that the Minister of Communications has a vested interest in controlling the SABC. We watched her unlawfully change the memorandum of incorporation of the SABC to give herself more powers over the affairs of the SABC, including the power to appoint executive directors as well as hire and fire non-executive directors, which is completely outlandish and not in keeping with well recognised and well understood public broadcasting principles as enshrined in the Windhoek Declaration amongst other instruments.â€ Mzwandile Khati, 30, journalist at Caxton urban news, Orlando East
[dropcap]â€œ[/dropcap]I am here to support the suspended journalists at the SABC, but also to defend the constitution. It is a state broadcaster now, even though itâ€™s not worse than other countries in Africa. No, actually, it is like other countries in Africa. It can be compared to Zimbabwe, Burundi, all those other countries where there is no media freedom and no private media; you only get a state broadcaster. Itâ€™s actually worse now in my opinion. Obviously, he [Hlaudi] must go, besides the fact that doesnâ€™t have a qualification, the guy doesnâ€™t look at the big picture. He just makes decisions without thinking them through.â€ Effel Abrahams, 52, activist and filmmaker, Johannesburg
[dropcap]â€œ[/dropcap]I am here because I am completely anti-censorship and I am completely against the tyranny that is going on inside the SABC. Iâ€™m against people being fired for wanting to practise their freedom of expression, in this case, SABC journalists. But in addition to that, censorship is not new to Hlaudi. Blacklisting of journalists and censorship has been going on for years, but Iâ€™m here today to ask that Hlaudi be removed from the SABC and the board to be dismantled and also for the Minister of Communications to be asked to leave. Any entity that can fire people without any notice when theyâ€™re right is not even an entity. Right now the SABC is a dictatorial entity and needs to fall and we can start again. A revolution needs numbers and it needs to be televised. All of them must fall and the masses must take to the streets for them to fall.â€ Dianne Hawker, 31, news editor at the Times, Melville
[dropcap]â€œ[/dropcap]The SABC is supposed to be a public broadcaster but under the current circumstances itâ€™s difficult to say who itâ€™s serving. But from what those in the SABC have complained about, from people I know, journalists with great integrity are saying they are moving far being a public broadcaster and serving the needs of citizens to a broadcaster that is serving the needs of the government, and that is of concern. The SABC needs to allow its journalists to operate freely in an environment where they are able to operate freely. We have a lot of protests in this country and to say none of that footage is going to be shown on the SABC is a cause for concern. It means there are millions of people in the country who will not be able to see what is happening. When the capital of a country is pretty much in turmoil as a result of protests, you cannot not show that. Of course you can have analysis of what is happening to explain to the public why that is happening, [but] you cannot not show that.â€