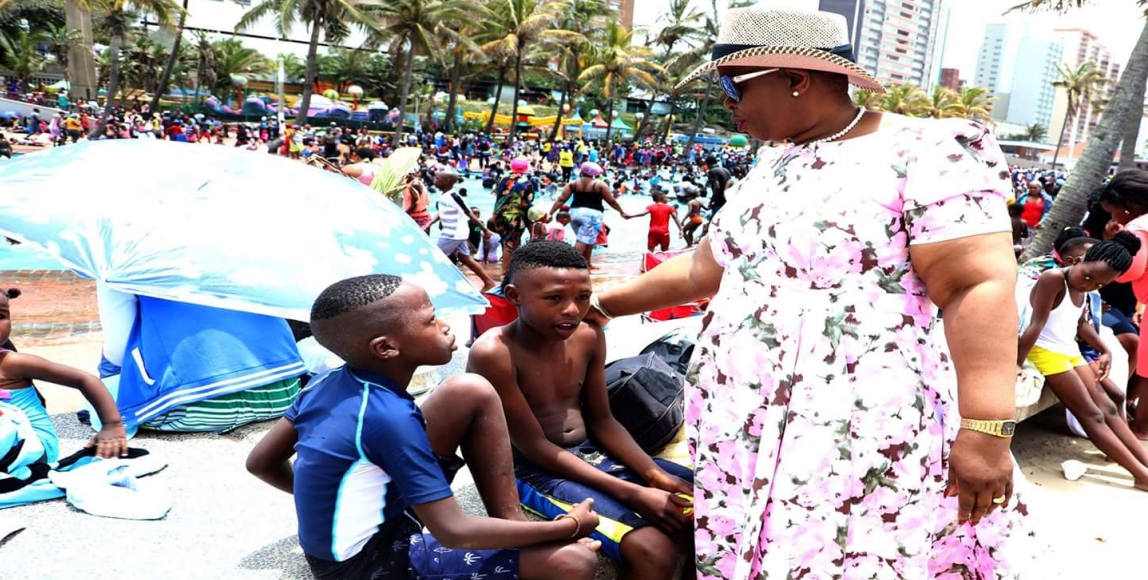 Thousands of people have descended on the city of Durban for the festive season, with many people taking advantage of the sunny weather to enjoy. The first peak weekend of the season began on 15 December, and on Saturday 16 December beaches were packed to capacity.

Swimwear, galloping waves and joyful noise welcome you as you make your way to the South Beach area of Durban. Young children are running around and playing in the pool areas as their parents watch them closely.

â€œI’m not here for fun but to work as a parent,â€ says Mbongeni Muthwa from Ndwedwe. His children wouldn’t stop hounding him about going to the beach since Saturday. A safety initiative by the municipality – where children wear an armband which displays their parentâ€™s contact details – has made the task a lot easier, he says.

â€œWhat most parents don’t understand is that when we bring our kids to the beach we are not here to enjoy ourselves. Our duty is the same as the guards deployed by the municipality to pay attention to the kidsâ€™ whereabouts,â€ Muthwa says.

Safety is always one of the major concerns during this time of the year. Kids easily get separated from their parents and people fall victim to criminal activities such as pickpocketing and mugging.

According to a statement by the eThekwini Municipality, during the first weekend of the festive season, approximately 252 children were separated from their parents and guardians, and about 92 rescue operations were carried out. IOL reported that on Saturday, a 15-year old girl was allegedly raped at Wedge Beach in Durban.

Nomsa Cele, 48, from Kwandengezi decided to skip work on Monday to look after her family at the beach. She said that she decided to accompany her grandchildren because of the disturbing things that usually occur at the beach.

â€œThey are teenage girls and I usually tell them how unsafe it is for them to be at the beach alone during this time,â€ she said.

Cele said that many criminal activities occur at the beach while people are filled with excitement from the festive season.

â€œThere are monsters and sexual predators among the people here, who are only here to kidnap and molest our children. We always hear stories of children going missing and others being raped, it’s not safe at all,â€ she said.

Police spokesperson captain Nqobile Gwala said the police were doing all they can to ensure the safety of the people during this time.

â€œThere’s additional manpower at the beach since the rape incident on Saturday, and we are also appealing to parents to be vigilant at all times,â€ she said.