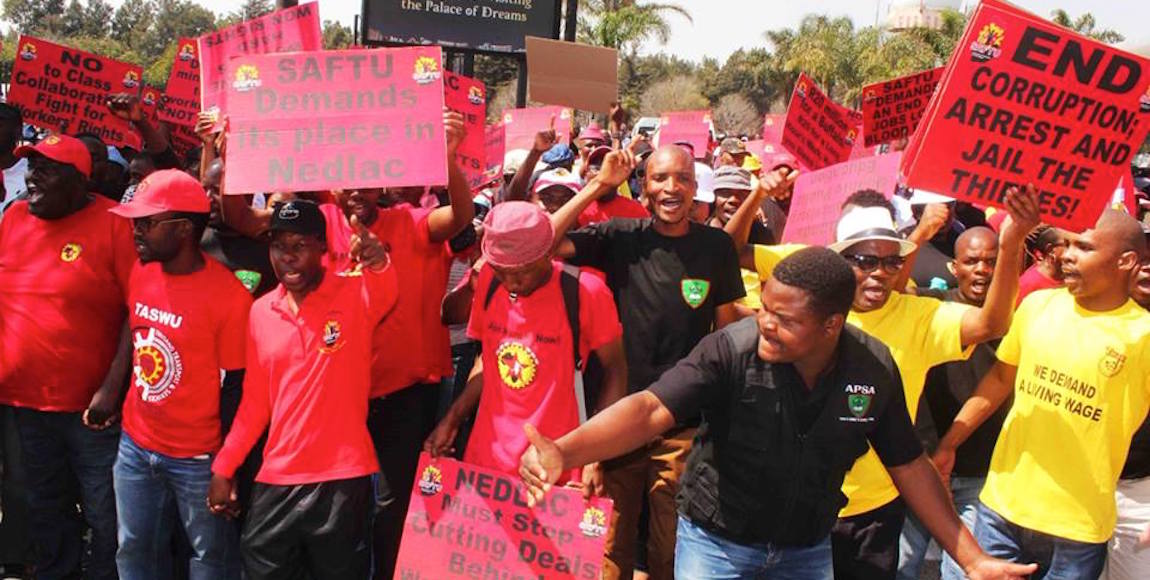 Cosatu embarked on a national strike on Wednesday to protest corruption and state capture. The recently formed South African Federation of Trade Unions (Saftu) didnâ€™t attend; instead itâ€™s called for its own section 77 general strike in November.

Saftu spokesperson Patrick Craven told the Daily Vox that Saftu has called for the strike over issues relating to the economy and the economic growth path of the country.

â€œWe need a radically new growth path based on job creation, reducing poverty and inequality. But our demands includes a number of specific items like a social wage, education and land redistribution,â€ he said.

In December 2016, Saftu applied to the National Economic Development and Labour Council (Nedlac) for permission hold a section 77 general strike. This type of protected strike must be authorised by Nedlac. It allows all workers involved in non-essential services to strike nationally in order to defend the socio-economic interests of workers. However, Nedlac has yet to authorise the strike.

Saftu has complained that Nedlacâ€™s delay in authorising its strike, while authorising Cosatuâ€™s strike on Wednesday, is a gross double standard.

â€œThis is made all the more suspicious by the recent granting of a section 77 strike certificate to Cosatu to protest at the Union Buildings, calling for an end to state capture and corruption, which was only filed in July, suggesting a deliberate policy to favour Cosatu and frustrate non-Cosatu unions,â€ the statement read.

Nedlac has denied any bias on its part and has said that other unionsâ€™ applications were also awaiting processing.

Saftu says it will move ahead with plans for a general strike in November and a peopleâ€™s conference on the crisis facing the country in December.

â€œOurs is an economy that was inherited from an exploitative colonial and apartheid past, and it is still wholly dependent on mining, finance and exporting raw materials to survive,â€ Vavi said.

Among the key items on Saftuâ€™s demands is the call to address the ongoing crisis in education.

Vavi said this demand was in solidarity with the calls made in #FeesMustFall but would also address basic education and specifically speak to parentsâ€™ struggles to afford their children quality and affordable education that is decolonised.

â€œWe are calling for the crisis of education, from grade R all the way to higher education in universities, to be understood as one that directly sets back the poor and working class,â€ he said.