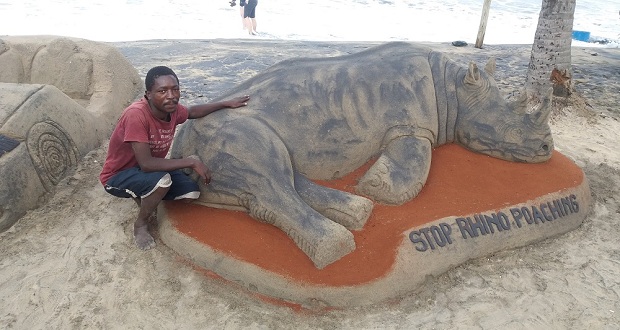 Mfanafuthi Gumede, a 26-year-old sandcastle artist from Inanda, North Durban found himself wandering the streets of the city after dropping out of school. He told the Daily Vox how he ended up at the beachfront where he builds sand sculptures.

Growing up without my father wasn’t easy because my mother was not working. She would normally go to the market and collect all the fruits and vegetables from the bins and make something for us to eat. I had never imagined myself doing this kind of a job to survive; similar to other young men out there, I had dreams.

When I was in grade 10, the situation at home deteriorated and I couldn’t watch my mother suffer any longer so I had to drop out of school. Dropping out of school wasn’t the best choice but my options were not really open at that time, I was hoping to find a job but things didn’t turn out the way I had expected. I was only 20 and I was desperate, I walked from the market to the beach, going from store to store asking for a job but it was only a dead-end.

Doing this kind of job for a living is not easy since we rely on people to donate to us. Some days are better and some are worse, in a typical day one would make R150 but we sometimes make way little than that. Although it doesn’t make us so much money at least we are doing something, we work for the little that we have. Sandcastle crafting saved me from drugs and criminal activities. Normally when people drop out of school in the township they take the easy way out such as robbing people and taking drugs.

The sad thing about being a young craftsman is that people often take you for a ride. People would come here, see my work and ask me to do something for them at their homes using cement but they end up not paying me and if they decide to pay, they pay me way little. What people fail to understand is that we have families to feed and since my father is not around, my family relies on me.

I have been doing this for quite some time now and if it were in my power I would start a business in the township and do this kind in people’s houses in the townships but people don’t want to pay and the material is expensive. I would like to do something real that would make my mother proud because, although I couldn’t finish school I am talented.

I just wish people would stop judging us and labelling us as lazy because we are all aware that there are no jobs in South Africa. There are educated people who are unemployed so who would hire me with my grade 10? If jobs were obtainable, we would all be somewhere far better in our lives but this is the least we can do than going around stealing from people.

The challenge we are faced with now is that more people have joined us over the years to do the same thing for a living and we can’t complaining because similar to us, they are also paying rent to the municipality. It was better over the years when there were a few of us but now that we are all occupying the same space, it’s not easy for people to donate because they wouldn’t know who to donate to so we aren’t making much.