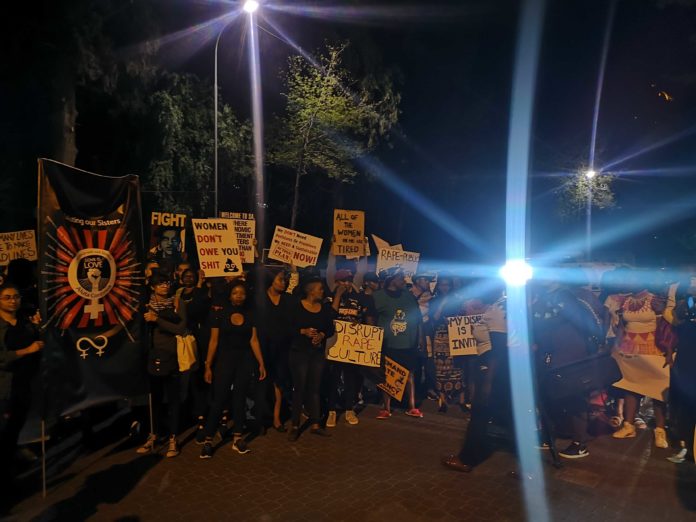 In the early hours of the morning, hundreds of protesters gathered in front of the Johannesburg Stock Exchange (JSE) in Sandton. The protesters were responding to a call made by civil society to shut the economic hub down in an attempt to address the gender-based violence rampage in South Africa.

Update: The protest moved to the streets of Sandton after representatives from the JSE turned down the demand by protesters for 2% of revenues to be diverted to initiatives to fight gender-based violence. The JSE have, however, conceded to have a meeting with business representatives and #SandtonShutdown organisers on 20 September.

South Africans have been protesting since the news broke on September 2 that a 42-year-old post-office employer had raped and murdered 19-year-old University of Cape Town student Uyinene Mrewetyana. Mrwetyana’s death, and the death of a number of other women in the past months have renewed the public call to fight against gender-based violence.

The #SandtonShutdown is the first big protest in Johannesburg in response. Capetonians marched to Parliament and outside the CTICC building where World Economic Forum was taking place to voice their anger over the crimes against women last week.

“The reason why we’re having this protest today in front of the JSE,” The Total Shutdown’s Mandisa Khanyile says in an interview with The Daily Vox, “is that the government has been telling us continuously that they don’t have funds to fund the fight against gender-based violence, so we’re basically coming to fetch the money where it is.”

The civil society collective is asking for 2% levy to be imposed on all corporates listed on the JSE. That money should go towards the fight against gender-based violence.

“After The Total Shutdown March last year, we did expect that the government was going to, after signing all of our demands, start implementing. We’ve been dismally failed in that regard. The President keeps making promises and is not actually delivering on so now we’re looking to secure delivery,” Khanyile said.

Despite many believing there was a typo on the protest flier, the action began at 3am.

It was still dark when the protest gathered

“We’re taking back the night,” Khanyile said responding to a question about the early start. “We actually wanted to be here before the casual workers and cleaners start working to show solidarity with them. We are part of the struggle with them and everybody counts. All those women who have to take transport at early hours of the morning to get to work and end up being survivors of gender-based violence as a result, we are here for them,” Khanyile added.

“I think it’s quite admirable,” Black Womxn Caucus leader Keitumetse Fatimata Moutloatse said about the turnout early in the morning. “It’s barely 6am and the streets of Sandton are filling up by the minute,” Moutloatse added.

The Black Womxn Caucus was part of the organising of protest action at Wits University on Monday. Thousands of students protested in the #WitsAmINext protest calling for safety for women on campuses. Moutloatse urged students to join the #SandtonShutdown.

Explaining the plan for the day, she said the formal programme will begin at 10-11am. Different political parties, the clergy, and survivors of gender-based violence will making inputs. The protesters will then be handing a memorandum to the CEO of the JSE. “The just of today is a 12-hour sit-in disrupting economic power, economic processes to say how dare this country think about making money if it can barely take care of its workforce which is majority women?” Moutloatse said.

Students Thato Baganeneng (22) and Oratlie Boemo (22) arrived from Braamfontein at 3am to join the protest. “We wanted to be part of everything from the beginning,” Boemo  said in an interview with The Daily Vox.

“I’m here because I almost got raped but I survived. Earlier this year, a friend of mine got raped. I’m here to support the movement,” Boemo said.

Bananeng said the reason why she attended is because she is a survivor of [gender-based violence]. “I was violated in sex, I was molested. I feel like [being at the protest] is really what I need to do for myself and for other women,” she said.

The morning protest was peaceful. However, in the morning an argument broke out between gender activists and the African National Congress Women’s League (ANCWL). Gender activist Virginia Magwaza asked the ANCWL, who had a considerable presence at the march, why they showed up when they were responsible for the mess women are in in the first place.