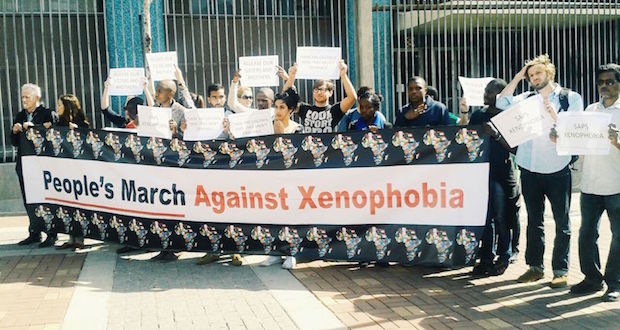 An unconfirmed number of foreign nationals are still being held at the Johannesburg Central Police Station following police raids on the Central Methodist Church and other locations across the city centre last Friday.

On Tuesday Lawyers for Human Rights (LHR), went to court to secure access to an estimated 400 immigrants arrested during the contentious Operation Fiela last week. The rights group also sought a comprehensive list of those arrested and an immediate halt to any deportation of the migrants for two weeks or until it has been allowed to consult with those who have been detained.

LHR was set to bring a contempt of court order against the department of home affairs for failing to provide these, but an agreement was worked out at the eleventh hour.

According to papers filed by the LHR, at least 22 women with small children having been detained in the raids and are being threatened with deportation. (You can read the court papers here.)

Solidarity protest
A coalition of human-rights groups staged an emergency solidarity picket outside the Central Police Station at 12.30pm on Friday. About 50 protestors sang struggle songs and held up banners and placards saying â€œRelease our Brothers and Sistersâ€ and â€œSAPS Xenophobiaâ€ outside the police station.

Stephen Faulkner, a representative for the coalition who was at the protest, said members were deeply concerned about the extreme measures used by members of the army and police. Faulkner said the arrests were a pretence for xenophobia, as many of the foreign nationals did, in fact, have all the correct legal documentation allowing them to stay in South Africa.

â€œThe government seems to be equating the presence of illegal immigrants as the cause of xenophobia, which is just nonsense,â€ said Faulkner, who expressed disgust at the fact that the foreign nationals were raided in a church used as a sanctuary for poor immigrants. Equal Educationâ€™s Freddy Mathekga, meanwhile, described the arrests as â€œunnecessary and futileâ€ and questioned why the police were expending resources and time on arresting foreign nationals when actual criminals were at large in townships.

– All images: By Muhammed Ismail Bulbulia.