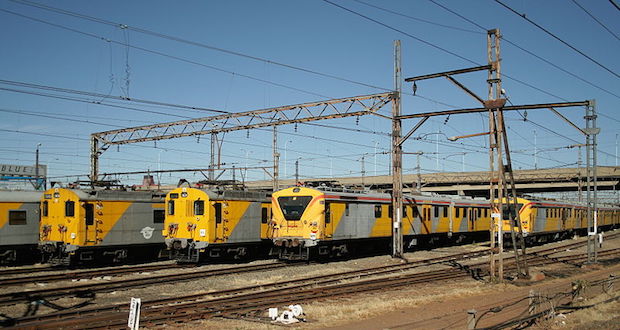 Thomas Skhosana is a security guard in Braamfontein. He uses the Metrorail train to commute to work every day. Although he is unhappy about the service, this is all he can afford, so he grins and bares it. Lerato Komane* is a communications director in Midrand. Although she has a car, she uses the Gautrain to avoid being stuck in traffic. She hates the peak times on the trains but would rather deal with that than drive in morning traffic. Thomas Skhosana, 32, security guard, Chiawelo
I stay in Chiawelo and I use the train that starts in Vereeniging to get to work. I wake up 03:30 to get ready for work and I take a 10 minute walk from my house to the train station in Chiawelo. The train is supposed to arrive at 04:12, but it is hardly ever on time. I have to be at work at five oâ€™clock in the morning but we often get stuck â€“ the train is forever late. I have two children and I am a single father. I barely see them because I leave very early in the morning and I come back very late. My 13-year-old son has to take care of himself and his little brother. I am not around to help them get ready for school or with their homework.

It is so frustrating to use these trains because they make me late for work so regularly. I already have three warnings and it is because I was late for my shift. If I am late one more time, I will probably get fired. My supervisor knows that my tardiness is beyond my control because she has used the trains before, but she cannot jeopardise her own job for mine. Itâ€™s not only the train delays that get to me, but the trains are also very unsafe. Just last week passengers were robbed at gunpoint in the trains. There are no security guards or other safety measurements to make sure these things donâ€™t happen. If I could afford it, I would use taxis, but that would cost me R24 a day â€“ that is too much for me. I buy a monthly train ticket, which is R155, so I have more money to spend on my children.

I have never been in a Gautrain before. I wish I could get a ride but it is too expensive. I have been to the station. It is so lovely! I couldnâ€™t believe it: it is so clean and it looks so safe. When I compare it to the Metrorail that I use, I feel like a second-grade citizen. Is it because we donâ€™t have money like those who use Gautrain that we get such a bad service? This makes me sad because I am missing out on life because of trains. Lerato Komane*, 29, communications director, Sunninghill
I have been using the Gautrain since it started in 2012. In the beginning there were lots of delays and sometimes I would opt to drive instead. I live in Sunninghill with my husband. He is self-employed so he never has to drive in the traffic, but I didnâ€™t have much of a choice and I was always so frustrated. So the Gautrain has helped me a lot.

I donâ€™t have any issues with the service except the fact that it is so pricey. Still, it does not break my budget. I sometimes wonder about those people that canâ€™t afford it â€“ it would make their lives so much easier. That is sad, but comforting at the same time because of the exclusivity it brings. I have never taken the Metrorail: I never plan to do so. I have heard stories of how dirty and dangerous it is and I feel for those that have to use it every day.

I feel like I have first world problems, you know. I am worried about the fact that Gautrain still hasnâ€™t installed WiFi in their underground stations and I canâ€™t check my Instagram or Twitter. That is as far as the inconveniences go. I guess it helps that I have a car as well and I do not completely rely on the trains. Introspecting on my Gautrain usage has made me feel spoilt and ungrateful â€“ these arenâ€™t real problems, yet I have them.

* Not her real name

– Featured images of Metrorail and Gautrain carriages via Wikimedia Commons.