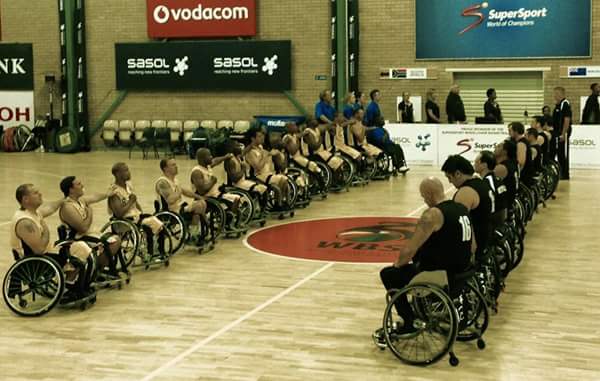 We’ve all seen theÂ Springboks stare down the All Blacks while they perform the traditional Maori war cry, the Haka. But on Friday, South Africa’s wheelchair basketball team rose to the Kiwis’ challenge like Zulu warriors.

The New Zealand war cry, the Haka, is regularly performedÂ whenever the Kiwis’ national team plays a match, and it’s no different for the country’sÂ wheelchair basketballÂ team, the Roller Blacks.

But at a recent match played at the start of a 5-match series against South Africa’sÂ “Amawheelaboys”, the Roller Blacks were in for a bit of a surprise.

The South Africans came prepared with a response worthy of Shaka Zulu himself. They hit back with a rendition of a traditional Zulu war cry, loudly chanting:

The chantÂ ended with rousing shouts of “Shaka!”

This uniquely South African call to battle served the Amawheelaboys well over the weekendÂ -Â they have won all of their encounters against the Kiwis so far. The Sasol Wheelchair Basketball Series has already been won by South Africa butÂ the two remaining matches will take place on 4 and 5 September.

The Springboks lost their last encounter with the All Blacks in July this year. As they head into the Rugby World Cup, perhaps they should take a pageÂ out of the Amawheelaboys’ playbook?