Promises have been made to students that no one will be left behind as the government tries to “save the academic year”. Yet students at Fort Hare say they are being left behind. This includes online learning and the return to campuses under level three of the lockdown.

UPDATE: On Friday July 3, some students from UFH marched to the East London and Alice campus. They handed over a memorandum of demands to the university’s management. Speaking to The Daily Vox, students said the current situation is very difficult as they could possibly lose further studying opportunities if they don’t resume academic activities soon.

The university also released a statement on Friday saying that students who form part of the first 33% of students will be invited back to campus. The first group of this cohort will be issued with permits to return to campus from 13 July 2020.

As level five of the coronavirus lockdown was put into place at the end of March, all higher education institutions closed and suspended the academic programme. Some universities moved the academic programme online providing students with data and laptops. Even with those provisions, many students and lecturers found the shift towards online learning difficult.

Students at UFH say they haven’t been able to begin the online learning programme. Issues range from students not getting data for online learning, not receiving laptops, and no plan given to students who need to return.

On April 29, the university released a statement saying that UFH will make available 12 000 laptops (with modems and data) to enable all students to participate in online learning

remotely. UFH said they would not be in a position to switch over to online learning but instead learning materials would be uploaded for students. They would wait till it was safe to bring students back to campus to “pursue blended delivery methods which will require our students to have all the tools necessary to recover lost time.”

Students have decried a lack of communication from management around the issues they are raising.

The university said on June 19 they were readying the campus for the return of students. The management said these would be a phased return to campus for senior management from June 24.

In a statement released by the student representative council (SRC), they mention they were invited to a UFH Covid-19 response team meeting. The SRC said according to the response team the university is ready to receive students. They said they have concerns about permits for students to return to campus.

“The SRC has been doing all it could to pressurize the MEC to give this approval needed. The difficulty we are facing is that these managers can only be accessed telephonically and e-mails only as we do not meet face to face,” the statement read.

Many students attending universities such as Wits University and University of Cape Town have completed writing examinations for the first semester. However, UFH students say they haven’t even received their allowances or data.

Speaking to The Daily Vox, a member of the university’s Pan-Africanist Student Movement of Azania (PASMA) said after students were all sent home due to the lockdown, the university said they would make plans to continue learning. The student said it was announced on the radio that UFH would give students free data, modems and laptops for online learning with everything to be sorted by June.

“It’s now the first of July and nothing has been done,” said the student. He said lectures are taking place but many students don’t have the necessary equipment to study.

The SRC said they will not rest until all the students have data. “In relation to laptops, we have told the University that it must supply laptops to students as soon as possible. We do not want the University to delay this process anymore, hence we said that all those laptops that are ready must be given to students,” said the statement.

The university was approached for comment. The story will be updated once received.

Another issue facing students is around the payment of National Student Financial Aid Scheme (Nsfas). In order to be given the allowance, students need to sign an agreement form. According to the SRC statement, they’ve encouraged all students to sign the form in order for funds to be distributed so that students can receive their allowances.

Earlier this year, UFH students protested over students with historic debt wanting to register. A couple students were arrested at the time and the academic programme was suspended. 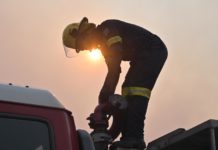 NEWSFLASH: The Cape Town wildfires continue a trail of destruction