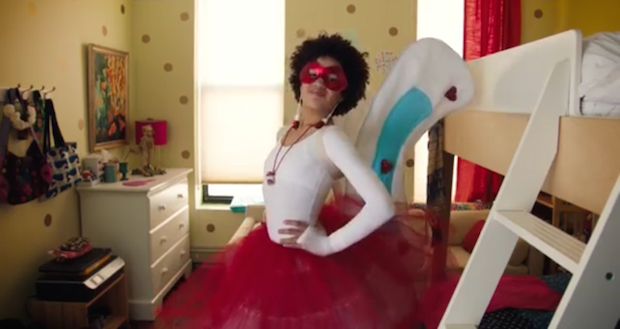 With World Menstrual Hygiene Day (29 May) just behind us, itâ€™s refreshing to see an advert about periods and womenâ€™s sanitary products that isnâ€™t focused on women jumping around in white pants or showing off the incredible absorption abilities of a sanitary towel using that weird blue liquid.

Hello Flo, a US-based womenâ€™s health company, â€œdedicated to helping women and girls navigate all stages of lifeâ€, has released a series of videos to promote itsÂ period starter kits â€“ each with its own adorable, humorous, two-minute plot.

You may already be familiar with the First Moon Party ad and Camp Gyno ad.

In the latest from Hello Flo, a young girl whoâ€™s just had her first period seeks out the mythical Period Fairy and interviews other members of the previously all-male department of mythical creatures.

Periods. Itâ€™s not all blue fluid and flik-flaks on the beach.

– Featured image: screenshot from the video.