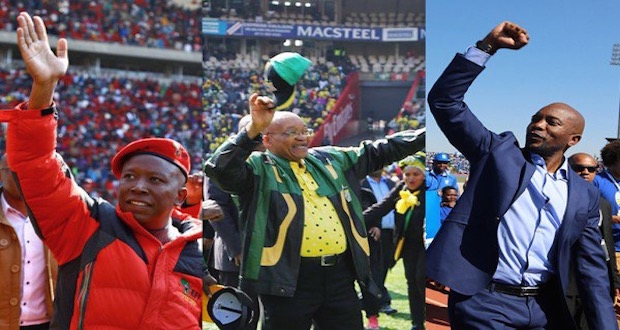 1. The DA will not enter into a coalition with the ANC

Mmusi Maimane confirmed at the DA’s â€œThank you Tshwaneâ€ rally on Tuesday that the DA would not be working together with the ANC because of the ANCâ€™s use of race to divide South Africans.

2. The EFF have outright denounced ever working with the ANC, but have also said that they are open to speaking with the ANC – and any other party – about possible negotiations

One of the unconfirmed rumours flying around is that the EFF would only go into a coalition with the ANC if Zuma steps down. This rumour is sometimes extended further with additional requirements for the ANC such as guaranteed mayoral positions and criminal charges laid against Cyril Ramaphosa. At this point, the EFF have not confirmed any of this. Many of these rumours may have to do with EFF members making somewhat facetious comments in the public sphere relating to their conditions for working with the ANC.

3. The EFF, UDM, COPE and UF have â€œagreedâ€ on a guideline for dealing with the DA and ANC

On Tuesday, 9 August, Bantu Holomisa published a Facebook statusÂ revealing that the smaller parties had agreed on guidelines to negotiating and forming coalitions with the DA and ANC.

While much of the agreed upon agenda featured benchmarks for service delivery and job creation, some of the more interesting provisions included:

Many of these are issues that can only be dealt with by national government – local municipalities and metros have no direct say over national policies. Holomisaâ€™s statement also calls for a national convention toÂ discuss: constitutional reforms on the land question, property ownership, nationalisation, electoral reforms, party funding legislation and strengthening of Chapter Nine institutions.

While the above is all legitimate, it is concerning that none of the parties and organisations mentioned have openly acknowledged the guidelines – especially the EFF. It might be the case that the EFF are awaiting the options presented to them by the DA and ANC before formally endorsing the agreement – despite the guideline mostly being in line with their politics.

4. The DA and EFF have already met

Despite the DA and EFFâ€™s strong ideological differences, the parties met on Wednesday, 10 August to discuss the terms of a possible coalition. There is a lot of uncertainty and rumours floating around the media and via chain messages regarding the terms being asked for by the EFF – many of the sources of these rumours are unidentified. Some of these include discussion surrounding the mayoral candidacy for Johannesburg and Tshwane, appointments to â€œminister of mineralsâ€ and seats on municipal councils. The EFF and DA have both denied that any negotiations have been finalised.

5. The AIC (African Independent Congress) want the ANC to reverse the demarcation of Matatiele as part of the Eastern Cape

A referendum that went around the town of Matatiele determined that the people wanted the town to be reincorporated into Kwa-Zulu Natal – the AIC was born out of this. Failing the ANCâ€™s provision of this, the AIC leader Mandla Galo, has said that they would enter into aÂ coalition with the DA.

6. Nelson Mandela Bayâ€™s majority is not yet finalised, but the DA have a strong advantage The Nelson Mandela Bay metro has no outright majority. Of the 120 council seats, the DA holds 57 and thus only requires threeÂ more to have the majority. The ANC holds only 50 seats, the EFF have 6, UDM 2 and other parties make up the rest of the seats with 1 each. The DA and ANC are currently in talks with the UDM, but the DA only needs one other party to hold the majority. The ANC, on the other hand, would need to form a coalition with all other parties, including the EFF, in order to hold the majority – and as we know, the EFF ainâ€™t willing to play ball with the ANC.