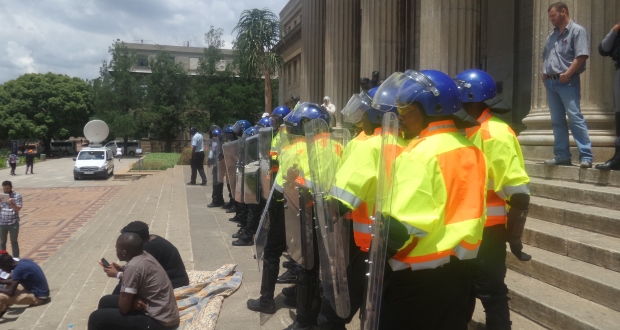 While it’s not news that students across the country have been protesting for and against a variety of issues, one major theme is the discontent with private security on campuses. The Daily Vox rounds up five universities that seem to have a major problem with the guards who are meant to protect them.

Since Monday, students at the University of Fort Hare have been boycotting classes as a form of protest against the poor security on campus. Students say that campus security needs to compensate them for stolen laptops and other stolen goods, some of which were taken from studentâ€™s rooms on campus.

At UKZN students have been protesting over a number of issues, these include the 0% fee increment, the state of the residences and campus security. They attempted to raise these issues with management, but management has been unwilling to address them. Students began protesting mid-August, with protest action taking place at Howard College, Pietermaritzburg and Westville campus.

Since then, students have been clashing with police and private security. The three security forces on the campuses – Risk Management Services, Mi7 and SAPS – have been accused of brutality against the students. Students said they even stormed into residences, pointed guns at students and searched their rooms. There was also an allegation that a student was raped on campus by a member of SAPS.

â€œAll the police brutality that we are seeing, that happened at Marikana, is happening right now at this university. Itâ€™s about time that South Africans to stand up against police brutality, like itâ€™s long overdue right now. We canâ€™t take it anymore,â€ Myende Sunshine, deputy president of the Howard campus SRC, told The Daily Vox.

The University of Limpopoâ€™s Mankweng campus was shut down in August when students protested against a series of violent crimes happening at the university. This followed after a student was shot in the leg at an off-campus residence. As part of the protest, students marched to the local police station demanding that they provide better security.

The shooting took place at Mamotintane, where most off-campus students stay. Limpopo police’s Constable Makgaba told The Daily Vox that the area is well known for robberies and that sometimes students who stay there are robbed and attacked. The university had meetings with SAPS to discuss a way forward.

In May, students at Vaal University of Technology handed over a memorandum to Student Support Services demanding the immediate end of their contract with Mafoko Security. Students claimed that campus security was allowing criminals access to the campus to steal students’ property, and did not feel safe as a result. They then clashed with security personnel after the university announced that it couldnâ€™t immediately end their contract with the security company.

Several buildings on the Vanderbijlpark campus were then torched later that night. But this was not the first time that students raised concerns about Â security on campus. Students also spoke outÂ last yearÂ in the wake of murders at off-campus residences.

â€œThe issue of security is not the issue of today, even last year we had a huge strike after students were killed, to say our security is not competent enough. There are security members who are suspended because they were found in possession of the universityâ€™s property. So we feel this is not right,â€ said SRC President Troy Mathebula to EWNÂ during this year’s protest.

Wits students demonstrated for campus to be demilitarisedÂ

Back in January, students and lecturers at Wits held a protest against the private security on campus. â€œThe protest is about the militarisation of campus right now. Personally, because I am a member of Fees Must Fall, I feel quite unsafe and not being able to move around my campus freely is just unsettling,â€ said law student Phyllia Ngoarje.

The protest was also sparked by allegations from students that they were harassed and sexually assaulted by private security, with management denying these allegations. Concerned staff also wrote an open letter to Wits Vice Chancellor Adam Habib, criticising his decision to bring private security onto campus.