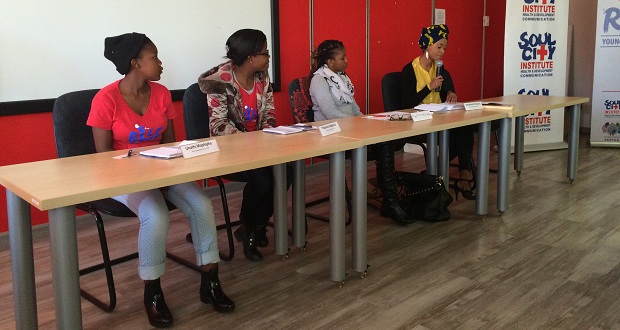 The Soul City Institute held a panel discussion on sexual violence and women’s voices on Wednesday morning at their offices in Johannesburg. The four panellists who took part were Unathi Maphipha (Rise Young Women’s Club), Simamkele Dlakavu (Wits University), Thakane Mashala (Rise Young Women’s Club) and Tsepiso Maleswena (Soul City Institute). The discussion centred around the reasons why rape culture continues to be perpetuated in South Africa, and we round up seven of the most pertinent points.

1. The bureaucracy of it all
The statistics on rape in South Africa only show a glimpse of the sexual assault that really takes place. Not many people want to report that they have been raped. But the big question is why?

Some stats to start off: 147 cases of sexual violence are being reported per day in SA. #SexualViolenceandvoice

When reporting rape you need to go to the police to report the crime, then to the lawyers and then to the court (if it ever gets there). These all create a form of secondary victimisation where the survivor has to re-live the trauma over and over again.

2. The police
Sure, you could say that the police fall under bureaucracy, but they are an entirely different problem on their own. Often, they will not take your assault charge seriously AT ALL.

They need to be educated on how to deal with these cases: not to laugh in someone’s face after they have been seriously violated, and how to take down a proper statement. Even dockets on sexual assault cases often disappear and go missing.

“It comes back to how rape is not viewed as a serious crime.” – @tshepiso_29. #SexualViolenceandVoice

4. Rape shaming
When you finally get the courage to report it, you are made to feel ashamed for doing so. As if you have just done something terribly wrong and for which you should be humiliated.

But the problem is that this shame doesn’t carry over to the perpetrators. They are the ones that are given the benefit of the doubt, that are protected and that come off almost scot-free. This is why the #RUReferenceList was published, where alleged and accused rapists were publicly shamed by their fellow students.

5. The government isn’t there for us
The panellists said that we should have stood up for Khwezi, who charged President Jacob Zuma with rape. When the ANC chose him as a presidential candidate, did we realise what kind of message that sent to the survivors of rape?

“The injustice of rape is not important to the ANC,” said Tsepiso. She explained that when the ANC chose him, it said to survivors that the government isn’t there for them; that they don’t take rape seriously because they chose an alleged rapist as a candidate.

6. Thinking that women owe men sex
Even when you are at the point where you are in bed with the person, you can still say no to sex. You do not owe sex to anyone. As for the men, when a woman says no, she means no!

Tshepiso- “Women are taught that they owe men sex.” #SexualViolenceandvoice

7. Refusing to teach our kids about sex
“There is something we don’t teach our sons and daughters and that’s about consent,” said Tsepiso. Parents need to teach their children about sex from as early as Grade 1; it shouldn’t be a taboo topic.

#ThakaneMashala – ” I wasn’t taught how to react to rape.” #SexualViolenceAndRape