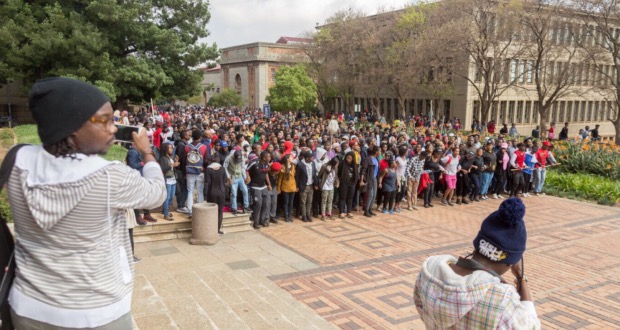 The Fees Must Fall protests have shaken up South African society and posed pressing questions about education, decolonisation and institutional culture on campuses. But South African students arenâ€™t alone in their calls for an overhaul of the higher education system.The Daily Vox looks at other student protests around the world that resonate with #FeesMustFall.

Germany
Germany is one of the only cases in the world where student protests for free education were a success, but it took a few years to get to that point. Germanyâ€™s higher education system is largely publicly funded and the country is a federal state with 16 autonomous states.Â A coalition government introduced a ban on tuition fees. Universities filed a lawsuit against this ban, arguing that prohibiting tuition fees would be an illegal intervention into the legal authority of the higher education matter of states. Students began protesting after this decision.

Seven universities decided to charge â‚¬1,000 a year with the expectation that other universities would follow suit. Instead, students protested against the fees by occupying campuses and refusing to pay the fees. When the Social Democrats and Greens came into power, they started the process of scrapping the fees in the states they controlled.

Education is not completely free as students still have to pay admin fees and students who take too long to complete their studies also have to pay fees.

However, there are many concerns about the scrapping of fees and it is most likely that tuition fees will be reintroduced at German universities by 2020.

Chile
In 2011, Chile experienced the Chilean Winter, a movement demanding greater state subsidies for higher education and then turned into a mass movement against the governmentâ€™s neo-liberal policies.

Students first protested against the vast disparities between the standards of education provided to the rich versus the poor. What began as protests involving high school and university students eventually manifested in a nationwide strikeÂ involving over a half a million people, demanding greater spending on education and healthcare, labour and pension reforms, and new constitution favouring direct democracy.

While protestors did not achieve all of their objectives, the protests – which took place over three years from 2011 to 2013 – caused a significant slump in the presidentâ€™s ratings.

Kenya
In February this year, Kenya experienced student protests when students at the Chuka University shut down the campus over disputed union elections.

In 2014, students from the University of Nairobi protested against fee increases, with students often coming into conflict with Kenyan police.

Many students were arrested by police on campus grounds while students also blocked a major highway.

USA
In 2015, students in the USA protested against increasing student loan debts and called for tuition-free public universities. The demonstrations, known as the Million Student March, were against student debt which often cripples college graduates who struggle to make repayments on their loans.

“The student debt crisis is awful. Change starts when people demand it in the street. Not in the White House,” said Elan Axelbank, 20, a third-year student at Northeastern University and co-founder of the national action.

CÃ´te dâ€™Ivoire and Burundi
In 2014, protests broke out in both Burundi and Cote dâ€™Ivoire. Universities in CÃ´te dâ€™Ivoire had been closed for two years after the 2010 presidential election and students protested over a lack of housing.

In Burundi, student protests for reforms in the grant system resulted in the closure of universities and the exclusion of student representative bodies by the minister of higher education. Students were also given ultimatums to promise to not strike again in the future.

Students staged sit-ins and mass demonstrations, and as well as occupied university buildings with the aim of ensuring that university vice-chancellors did not increase the fees.

Both the student establishment movement, as well as the police, were criticised for the often excessive use of violence.

Despite the student march being more than 50, 000 strong in number, the proposed student fee increase went through and a large majority of universities in England now charge Â£9, 000 per year.

Quebec, Canada
Quebec universities in Canada faced student protests in 2012 following a proposed fee hike of $325 per year for five years, which would result in an overall 75% rise in fees.

Students boycotted classes and went on a general protest. The protests also served as a rallying point for the disadvantaged and for anti-capitalist protestors. Even though there was not much resolution in terms of the protest, it started a much-needed conversation about increasing accessibility to higher education and the role that the state can play in supporting these ventures.