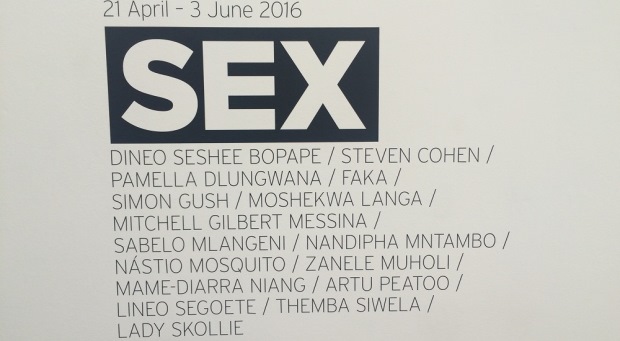 Curated by Lerato Bereng, the exhibition SEX is one of its kind in Johannesburg, forcing much-needed conversations about sex to be had at dinner tables. MBALI PHALA is no art critic but believes that the artworks exhibited are necessary.

My life starts and ends with art. On most days, I camp on the internet, looking at art and reading about it – new and old, African and international. Itâ€™s held me on days when the world wanted nothing to do with me. However, never in my graceful courtship with art did I ever imagine exhibiting art displaying sex so explicitly.

There was excitement in my stomach when I walked through the doors of Braamfonteinâ€™s Stevenson Gallery. Itâ€™s like when youâ€™re crushing over somebody and you get butterflies in your stomach – but not quite. This excitement quickly turned into a sea of inexplicable emotions, and an element of discomfort as my eyes locked onto a screening of restaged sex scenes from men-only sex clubs by Joburg-based collective FAKA. I had never seen this before, but it wasnâ€™t that scene that caused the discomfort. It was the realisation of knowing that I am exploring sex, publicly. The exhibition, SEX, is a set of continuing responses to the question â€œsex?â€ which, according to Stevenson gallery, was offered to artists as a curatorial proposition. SEX is a kaleidoscope of positions unearthing sexual narratives from Johannesburg, South Africa, and the continent through various mediums of art. From cartoonist Themba Siwelaâ€™s paintings depicting fictional scenes from black South African rural and urban contexts, to Moshekwa Langaâ€™s piece portraying a moment of masculine eroticism, expressing the weakness of intimate moments of self-pleasure in relation to the presence of another â€“ a kind of juvenile sexuality. Other artists on display include Laura Windvogel (under the pseudonym of Lady Skollie), whose artistic expression focuses on themes of greed, lust, sex and gender roles; Sabelo Mlangeni, who has made a name for himself with his touching black-and-white photographs; and Zanele Muholi, who is known for exploring black lesbian and gay identities and politics in South Africa. Muholi is also displaying a homophobic hate crime timeline on the galleryâ€™s fifth floor, detailing over a decade of murdered women and men within the LGBTQI community in South Africa.

Across the wall from Muholiâ€™s exhibit was “Sextime”. This is a selection of short stories from African writersâ€™ collective, Jalada, which had me chuckling as I moved one from story to the next. The fiction works primarily focus on sex, along with other literature and archived sound and film. A collection of video works will be screened during the run of the show until June 3, including Of Good Report, which was the first South African film to be banned since 1994.

I had learnt a ton about sex and its different narratives at the end of my walkabout in the gallery. I know this because the shipment assistant said to me, â€œYour facial expression says it all. Youâ€™ll be okayâ€.