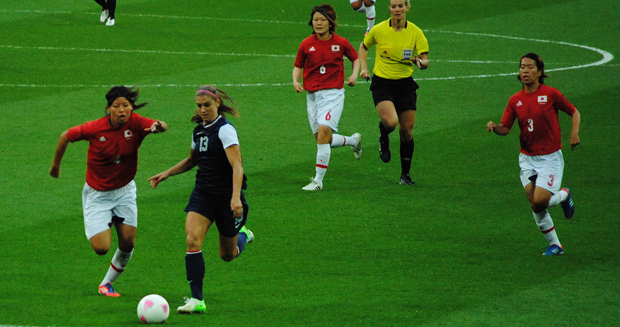 The Fifa womenâ€™s World Cup began last Friday in Canada, but how many South Africans are even aware of the event? We certainly arenâ€™t able to follow the action on our TV screens. Activists took to Twitter to point out the double standards when it comes to broadcasting womenâ€™s sport.Â

Feminist activistÂ Pearl Pillay kicked things off this morning, when she called SuperSport out and asked why the tournament wasnâ€™t being broadcast.

So @SuperSportTV isn’t broadcasting the Women’s WC. Why we surprised? Sport only matters if it’s played by someone with a penis. #SexistSA

And journo Rebecca Davis backed her up. Why arenâ€™t we able to see the best of womenâ€™s soccer on our screens in the same way weâ€™re able to watch, for example, Serena Williams dominate on a tennis court?

Or by someone in a short skirt, cos then it’s finally deemed watchable http://t.co/hDlmBhacNQ â€” Rebecca Davis (@becsplanb) June 9, 2015

SuperSport immediately hit back, and rejected claims of sexism.

Au contraire. We offered FIFA good $$ for Women’s WC & men’s u-20 WC. Couldn’t do a deal.Nothing to do with gender http://t.co/MAAK0lPYeU

Some people were backing up the pay broadcaster.

@becsplanb @SuperSportTV @PearlPillay Why would the offer as much as the men’s WC? Women’s WC not as popular won’t draw the same viewership â€” Justin Kellerman (@SoopaJuice) June 9, 2015

But other tweeps were adamant that SuperSport was just making excuses.

@SuperSportTV @PearlPillay What offer did u make? A smaller company in Nigeria got rights, but a WHOLE supersports couldn’t get same rights?

@PearlPillay why can’t people acknowledge that if effort is put into valuing women’s soccer, we can get a turnaround?

Because how is womenâ€™s soccer going to get popular, if itâ€™s never given exposure?

You’ll see a Jomo Cosmos game with three people in the stands BUT it will be on TV. Imagine if you gave women soccer a chance. â€” Third Farce (@MsShaneSK) June 9, 2015

Why do people not want to watch women in action as they kick some balls?

So many men are deeply invested in devaluing women athletes. Why? Your penis won’t shrink if you support equality. Seriously.

I just don’t understand why some men are soooo resistant to women’s sport being given more coverage. Seriously, why does it bug you so?

And Pillay wasnâ€™t budging on how this is an issue that hadnâ€™t been given attention, beating minister Mbaks at his own game and throwing all the shade at him.

I wonder if the Minister of Sports knows that Supersport isn’t broadcasting the Women’s WC. Twarring with the air takes so much of his time.