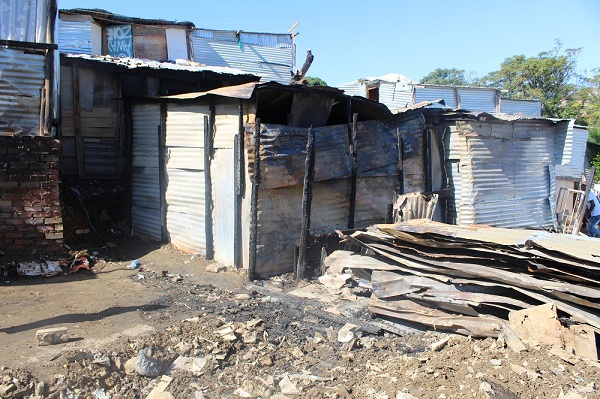 On Wednesday night, a fire burnt down several shacks in the Hoffman Place informal settlement near Overport. As a result of this, some 29 families were displaced. Those who can afford it have started rebuilding while many more wait for assistance from different parties. Qiniso Mbili spoke to STEVEN XIMBA, one of the community leaders to find out what it takes to rebuild your life after a shack fire. People are traumatised; it is one of the worst feelings to see fire flames rage through your property. Some hear about shack fires and think it is no big deal because it happens so often and itâ€™s just shacks. What those people donâ€™t understand is that these are peopleâ€™s homes, where some base their whole lives.

The last time there was a fire here was in 2012. It was bigger than this one and people had to wait two months for help from officials. These fires disrupt lives of residents in a way that is unimaginable to someone who hasnâ€™t lived in the shacks. Because there was loadshedding on the evening of the fire, we suspect that someone who was using a candle slept and left it on. Fortunately, no one was injured. Living in the shacks is already hard enough. These fires always come as a reminder that one must work hard and get out of here as this is no place to be settled in. People come to stay here because of desperation, but when they get here their dignity as a human being is degraded and after sometime they get used to it. Then when everyone is settled, thatâ€™s when water cuts, electricity cuts, evacuations and shack fires come. One should always remember not to be too comfortable here as life is unpredictable. Most of the people whose shacks were burnt down have lost everything. The only items they own right now are the clothes they have on their backs. Winter is fast approaching and they have to have warm clothing by the time it gets here. School children have not been going to school ever since because their school uniform and school books got burnt. Some have lost their ID books and other important documents in the fire. The displaced families are currently staying with surrounding families in the community. This is not conducive as shacks are already small and to have more people move in just makes things worse. Only three families are rebuilding right now but even they are going to use the same zinc metal that was burnt down. This zinc is dirty and unhealthy; theyâ€™re just doing this so they can get back their own personal spaces. Some religious organisation donated to the community with 120 blankets and the councillor has opened a soup kitchen for us. What people need the most now is building material – that is poles, zinc sheets, windows, doors and nails. At least with that they will be able to have a headstart towards getting their lives back to normal. When you live in a shack it means that you are poor more than anything. Now when all your property gets burnt down by a fire, where do you start picking up the pieces given your sad economy?