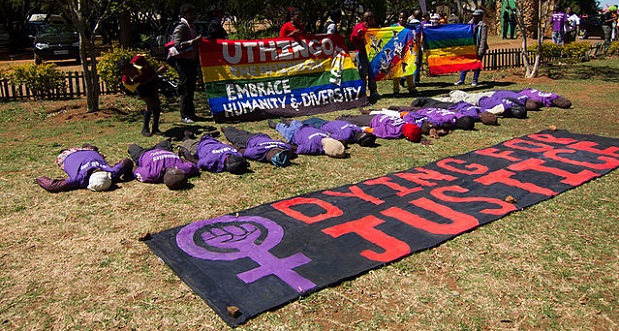 The tragic murder of LGBTI activist and lesbian Noluvo Swelindawo, Â during 16 Days of Activism, is disturbingly ironic. According to Sharon Cox, Health and Support Service manager at LGBTI rights organisation Triangle Project, queerphobic crimes in South Africa are very common. Cox told The Daily Vox how we are nowhere near solving queerphobia in South Africa and that to make progress, people’s mindsets need to change.

I don’t think there is enough being spoken of in places where it needs to be spoken of. If we talk about protection [of LGBTI persons] then we can say yes, there are legal protections. There is a Constitution that clearly spells out that there can be no discrimination on the grounds of, amongst others, sexual orientation. But that does not translate into everyday lived realities. It just doesn’t because people’s attitudes have to change, people’s mindsets have to change. We would be fooled into thinking that we are anywhere near changing mindsets. We know that we live in a country where conservatism is high, where people still have prejudice that is firmly rooted in their faith, for example. That, for me, is highly problematic.

Much of the treatment of queer bodies is fuelled by two things. It’s fuelled by patriarchy because in the cases of murder and rape, underlying that is often the thinking that, “you are taking away our women” or “you think you are a man, we will show you what a real man does.” So you have that kind of thinking that fuels that kind of hate. It’s also fuelled by prejudice and if you dig a little deeper under that prejudice, it comes from a place of being based on people’s belief system. It’s as easy as that.

I saw in one of the publications that [pastor] Steven Anderson who was deported [from Botswana] has now joined forces with our local version of Anderson and they’re starting a church here in Cape Town. Unfortunately, people like that hold a lot of power. That kind of hate speech [by religious leaders] catches on very quickly, and people take that as gospel. They take that as yes, it’s okay to kill gay people because they don’t deserve existence. Then you have the atrocious crimes that are committed against LGBTI people.

Are we teaching enough in our Life Orientation classes? Schools are a key entry point. Are we calling in organisations or community based organisations to come into our Life Orientation classes so they can dedicate one hour of the class to this [LGBTI awareness]? Very often, the perpetrators are young people. We need to start with young minds to say that this is not okay. This needs to be spoken of by parents and adults, in all the sectors of our community, in our churches, in our places of work. When adults speak at home, you hear the word “moffie”. If a little boy child comes home from school crying he gets told, “Oh, don’t be a moffie.” From very young, we’re teaching people this discriminatory language and so we keep on raising children who from a young age discriminate against other people.

I don’t know that it’s the police’s role to sensitise people. Their role is is in response to crime. We can talk about if a crime has been perpetrated, do they do their job? We can talk about the broader context, if a woman is raped and killed by her partner, do they do enough? And oftentimes sadly that response is no, they don’t. I would far rather say, do we as a community as a whole do enough? Do churches do enough to speak to the fact that all hate is wrong and all prejudice is wrong?

A person who doesn’t conform to what society understands as “normal” – you are LGBTI, “you are not a real man”, “you are not a real woman” – is considered less than. It’s easy then to torture you, to murder you, to step over your body and keep walking. This is the same way that apartheid was held up. Anybody who was not white could be treated as less than. You were not considered human, you were considered inferior. It’s the same principle that homophobia is held up with.