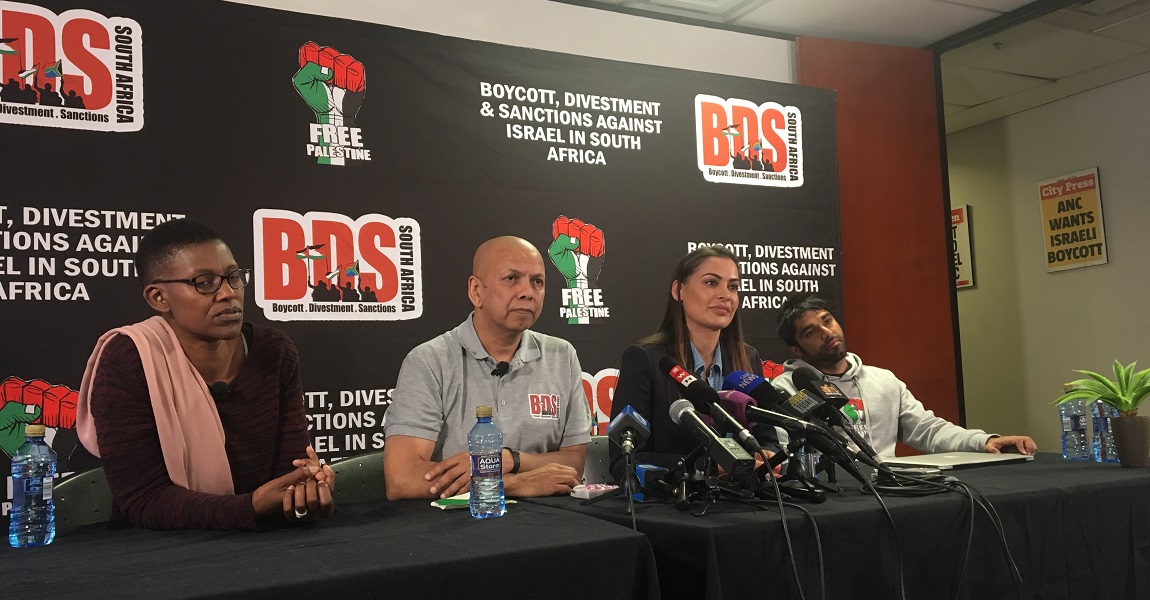 We still don’t understand why human rights and Palestinian solidarity organisation Boycott Divestment Sanctions South Africa (BDS SA) held a presser for Shashi Naidoo. The South African TV personality and model was publically lambasted after a recent pro-Israel social media post where she called Gaza a “shithole”. She said she will be taking a trip to Gaza to “educate her on issues in the area”. While her attempts to learn and unlearn are commendable, we have to ask why BDS SA is giving the “process” a public platform.

BDS SA met with Naidoo on Tuesday after she reached out to the organisation. Naidoo apologised for her actions and confirmed that she and her mother would pay for a trip to Palestine following an itinerary prepared by the South African Council of Churches. She said the visit to Palestine will be a “journey of educating herself, of listening, of learning, and of sharing”.

In an argument with an Instagram user of a picture she posted with Black Coffee, Naidoo referred to Gaza as a “shithole country” and defended Israeli actions. The South African DJ recently came under fire for performing in Tel Aviv on the same weekend when Israeli forces killed dozens of Palestinian protesters and wounded thousands more.

Someone needs to educate this ignorant fool. #unfollow #ShashiNaidoo pic.twitter.com/ZwaYuQoKe3

Her support for apartheid Israel and disregard for the Palestinian cause generated a massive public outcry, and rightly so. It is the responsibility of someone with such a large following to refrain from making ill informed political statements on contentious issues.

This is brutal dear South Africa! You guys are ruthless #ShashiNaidoo pic.twitter.com/Bi0uakwNxO

I’m atheist which means I don’t particularly care for any religion but to me, injustice is injustice. Where you see children being injured or murdered, regardless of circumstances around it, it is wrong period & cannot be justified in any way. #ShashiNaidoo wow moghel

The model has since apologised a number of times. On Instagram, she said she knows many Muslims and she is not politically educated.

Naidoo admitted that she “stupidly copied and pasted” the response she gave verbatim from a friend in an attempt to appear smart on social media without reading it properly.

Here’s the Shashi Naidoo deleted Instagram video. Still trying to figure out why she used the black and white filter ðŸ™ˆ pic.twitter.com/QU1EX8aJWs

Naidoo also said she had received at least 10 death threats.

Some of the personality’s sponsors including Glam Palm and Lil Jewels have severed ties with her. Gold Circle also pulled Naidoo from this year’s Vodacom Durban July scheduled to take place on Saturday, July 7. Naidoo said losing endorsement deals had created the necessary space for her to educate herself.

BDS SA director Mohammad Desai said criticism of Naidoo is welcomed by the organisation but that it “condemns all forms of violence as well as intimidation and bullying”.

The model in no way endorsed BDS SA during the conference but seemed to lend on it’s credibility in the pro-Palestinian movement to offer her apology credibility.

The organisation said it accepts Naidoo’s apology wholeheartedly and reiterated the virtues of forgiveness. We have to ask: what gives BDS SA the authority to accept Naidoo’s apology? She didn’t just offend people, she denied apartheid Israel. She denied the suffering and deaths of thousands of people – not just Palestinians but African refugees and migrants too.

The nature of call out culture is such that everybody is held accountable for what they put out on social media. Public personalities like Shashi Naidoo are, of course, no exception. People who are dragged have to learn the hard way, to educate themselves to be better or to defend their positions. No one is given the public platform to atone for their actions and Shashi Naidoo should not be an exception.