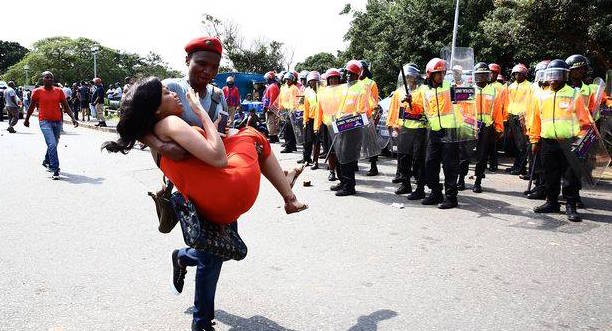 Bongeka Mntaka is a student from UKZN who was shot at close range by a police officer as she attempted to enter her Howard College residence while protests raged around her. She described the incident to The Daily Vox.

I was meeting up with my group at campus because we had to prepare for a presentation. We were supposed to present today so we were to meet at the law library. But there was a strike and students were protesting, so they were throwing stones at us. Then we decided to go meet at a safer place, at the park close to the law building because we didnâ€™t want to humiliate ourselves at the presentation – so we had to practice. But then things just went out of control and we decided to part ways.

When I was going back to my residence – I stay on campus – one of the female police officers told me to go the other way, not towards the way I was heading in. So I listened to her and started walking the other way. Then she started shouting at me, telling me again to walk the other way. But I told her I was following her orders and walking that way. Like really, what did she want from me?

Thatâ€™s when she just got angry and shot me. At close range. The two bullets got stuck in my leg. She was within very close range – as in I could have reached out to her and touched her with my arm. Not metres apart, but centimetres away from me.

One of the guys carried me to a safe place, but as he was carrying me, police were shooting at us. My friend from the group I was working with took me to the hospital.

She shot me just below my knee. The doctors extracted the bullet from my leg and said that I had severe muscle damage. My leg is currently wrapped up and Iâ€™m in crutches now as a result. Iâ€™ve filed a report with the SRC and the Iâ€™ve made a statement with the police on the incident – although it was a police officer herself who shot me.