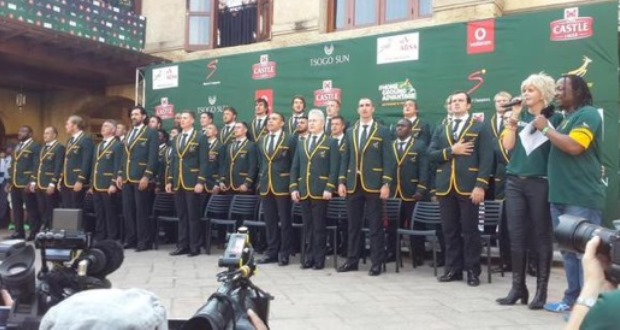 Three buses danced along the highway, bringing a contagious hum of celebration and cheers to motorists on an otherwise unspectacular Friday afternoon.

A childâ€™s delight, a sporting team poised for glory on the worldâ€™s stage and a wave of patriotic euphoria sounds like a good story to tell. It would be if it was not scripted around an unbearably untransformed national rugby team and lily white symbols of achievement and excellence. This makes it a story for scorn, not celebration.

Seventy four percent of the team is white. Since 1992, only 20 black Africans have formed part of the national rugby squad, of this African country.

The Springbok is an exquisite creature, prized for its speed and dexterity, not this labouring, impotent beast, unable or unwilling to be a positive player in the crafting of a just nation. The Springbok team, in its current form, remains a symbol of racism and we should protect our children by shunning this team.

I have never supported South African rugby. To me, it has always been a terrifying carnival of white male dominance. A symbol of a highly oppressive racist yesteryear that fractured the dreams and hopes of generations of black South Africans.

And in Biko’s month!

I expect it of white people. To be greens, that is. For most white people, celebratory displays of inter-racial embraces within the sporting arena signal unity and reconciliation. White people remain complacently satisfied in the afterglow of such rainbow nation exchanges.

But are black South Africans now trading in black for green, in the name of patriotism?

In a television interview this weekend, Black Consciousness activist and author, Andile Mngxitama, spoke of the absurdity of black people clapping and rooting for a Springbok team that does not represent them. His newly formed political movement, BlackFirst LandFirst, called for a boycott against the Boks. A call supported by the Soweto rugby union. Patriotism is about putting South Africa first. Supporting a white-dominated Springbok team is unpatriotic, for it snubs out the hopes of a truly transformed country.

Steve Biko, who was brutally murdered by the butchers of apartheid, and whose legacy we recently commemorated said, â€œBlacks are tired of standing at the touchlines to witness a game that they should be playing.”

It is time to own the playing field.

Kim Heller is a political strategist and an advocate for economic liberation.