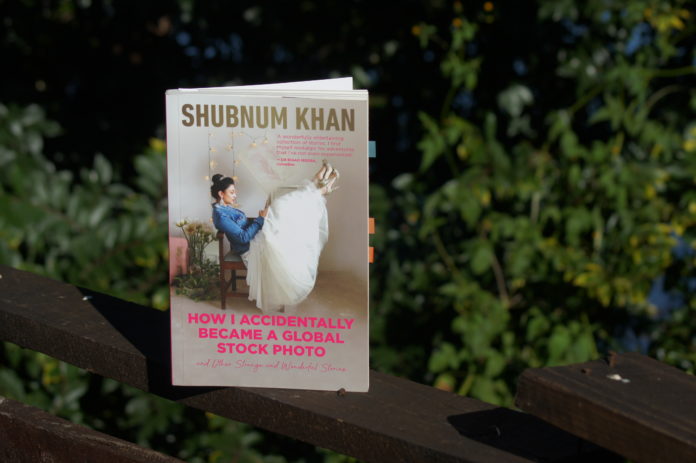 “Tell me, what is it you plan to do with your one wild and precious life?” is a quote by poet, Mary Oliver that opens Shubnum Khan’s book How I Accidentally Became A Global Stock Photo and other strange and wonderful stories. The book has been described as part travelogue and part memoir. It is all that and more.

This is Khan’s second book after her 2011 fiction release Onion Tears. It’s the kind of book you can read in a day, but it will stay with you long after you’ve closed it. It’s a journey through Khan’s experiences of the world. Reading the book coming from a similar background as Khan – Muslim, Indian, single and a woman – might have made the book more relatable. But I’m not the only one who connected with it.

A day after the book’s official Zoom launch, The Daily Vox chatted to Khan about her book. It’s only been about a week since it was released, and Khan said she was surprised that so many people related the book.

She said this made her realise that maybe we all need to talk about how much fear we experience and the struggles we are all going through.

Read more: A love letter to the man who wrote this advert in a local paper

One of Khan’s greatest skills is recounting the amazing adventures she’s had in her life – and she’s had many of those, several captured in her new book: shaving all her hair off, almost drowning during a family gathering, and encountering a cockamouse (fans of the show How I Met Your Mother will understand) in India. But perhaps her most powerful ability lies in writing about people and her connections with them in a way that shows a shared humanity. In this present time where people are separated from loved ones and where basic touch can be harmful, this book serves as a reminder that no matter how difficult life is, we can all be connected by our shared humanness.

“That’s kind of what makes the book,” Khan said when asked about it. “Having all these little experiences with everyone […] This book is a reminder that there is a life waiting after this – no matter how despairing you feel, how terrible it seems. Despair ends and life goes on at some point. You just have to have the patience to wait for it.”

Khan talks about her struggles with feeling stuck and heartbreak but her resounding message in the book is to remain soft and true to yourself. “People will always tell you what to do and how to do it especially if you’re a woman or a girl. You need to live your own life and you need to pursue what you love. And I think as long as you do it with a sense of self and a sense of grace and respect, you can thrive,” Khan said.

She also hoped that people were reminded that connection is important to living a fulfilled life. The connections she encounters in the book range from the man in China who helped her and her parents with their luggage to the crying woman she hugged in Fez.

“I wanted to portray that in the book that there’s such a thin line between being happy and being sad and having funny moments and having introspective moments,” she said.

Read more: Blaming women is the easiest thing to do

For all the stories about shared humanity and having great adventures, the book is also about what it means to travel through spaces as a woman of colour. Khan said this is something she realised while writing the book and wants to explore in the future.

During the writing and research process, Khan read more than 70 memoirs to find her voice and style for the book. She realised there were lots of books about walking, most written by white men. “This book looks at it from the perspective of a single, Muslim woman of colour because that influences how you navigate a space. I don’t know if that comes across in the book but that became a big theme for me,” she said.

In the book, Khan writes about feeling unsafe walking in South Africa as a woman. She starts to explore what that means in different contexts whether it’s New York or Saudi Arabia or India – but says in future writing she wants to expand on that idea.

Khan’s book is many things. But one thing that stands out is that it opens a space for greater understanding. She mentioned at the beginning of the interview that someone in an interview told her they couldn’t understand why a 27-year-old woman couldn’t travel on her own. Her book answers that question by delving into the particular cultural and religious intimacies of this.

The book joins a growing genre in South African literature of women of colour writing their stories and exploring their identities for themselves but also for others to understand.

Read more: The Daily Vox recommends: Our best picks of women writers in 2020

As Khan said: “Your memories are all you have. You would be nothing without your memory. So you’re recording yourself and you’re solidifying your existence in the world for yourself.”