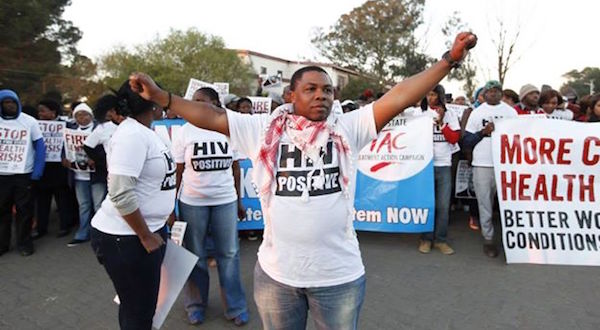 The Treatment Action Campaign (TAC) on Tuesday launched a global funding campaign to raise R10-million rand by the end of November.

The TAC is known the world over for its Aids activisim and its successful civil disobedience campaigns during the early 2000s, which forced government to make antiretroviral (ARV) treatment available to South Africans. But its funding is drying up.

The organisations believes this is because HIV is dropping down the political agenda in South Africa and around the world.

â€œSeveral foreign donors are withdrawing funding for AIDS and no longer funding the TAC or other civil society organisations as they did in the past. Donors such as the United Kingdomâ€™s Department For International Development (DFID), who have been a key funder of TAC, are pulling out of South Africa due to our middle-income status,â€ it said in a recent statement.

This is despite the fact that about 400,000 new HIV infections and an estimated 88,000 Aids related deaths occur in South Africa annually.

As one of the nationâ€™s most ardent civil society organisations battles for survival, we give you six reasons why South Africa still needs the TAC:

â€œIn 1999 a close family friend died after being HIV positive for several years. Until the very end, he was in complete denial about his HIV status. Before him, his wife and son had died too. Itâ€™s that denial along with a lack of education and access to treatment that led to their deaths. At the time, the Treatment Action Campaign (TAC) was barely a year old. The progress [TAC] has made since [1999] in campaigning for the provision of treatment of AIDS patients has been astounding. Knowing that there are options and having access to those alternatives has changed the fate of AIDS patients who would otherwise have been influenced until today by stigma, the threat of rejection and their lack of understanding of their rights and treatment/hard fought for by the TAC. Preventable AIDS related death is no longer an option. TAC has made it so.â€ – Fahmida Miller, television anchor and reporter, CCTV Africa

â€œIn South Africa nearly one in seven new HIV infections could be prevented if women were not subjected to physical and sexual violence. Power inequalities place women and girls at greatest risk. Prevention of violence is a long haul effort and our responses to HIV/AIDS should remain at the top of our agendas as we work towards this goal. Treatment Action Campaign has been instrumental in this response to provide quality care to live a quality life for those affected by HIV and AIDS. Think of our women and girls, value their lives, save TAC.â€ – Lizle Loots, senior scientist at the Medical Research Council

â€œThe struggle against HIV and AIDS is not over. If TAC closes down people will die, I donâ€™t want to die. TAC is the mouth piece of the poorest of the poor, as long as are affected by HIV and tuberculosis the struggle is not over, the money will go back to those whose lives we want to save. We must source the money; there is no plan B.â€ – Anele Yawa, TAC general secretary

â€œI will wear my [HIV-positive] t-shirt defiantly and proudly in support of the TAC. AIDS is by no means over. TAC addresses these problems like no other group is able to, literally fighting for a life and death system in the Free State where the health system is collapsing.â€ – Stephen Lewis, former United Nations Special Envoy for AIDS in Africa

â€œThe actions of TAC were a vindication of our wonderful constitution but AIDS is not over while one person still needs ARV treatment. Let us invest in our quest for social justice. The fight against AIDS is not over while the scourge of HIV and TB is still fought. It is not over until the evils that drive HIV, like rape and violence against women and children are defeated. Please show solidarity and prove our belief in othersâ€™ humanity by donating to TAC in the organisationâ€™s time of need.â€ – Archbishop emeritus, Desmond Tutu

â€œSaving the TAC would give us many things. It would save a voice that South Africans have created that speaks truth to power. A rare, apolitical voice. It would keep alive a network across the country that still saves lives to this day. It would make sure that the war against Aids occupies more of the centre-stage than it does now, while ensuring our culture changes to embrace those who are positive. And it would make us a better country.â€ â€“ Stephen Grootes, Daily Maverick reporter and Radio 702 talk show host