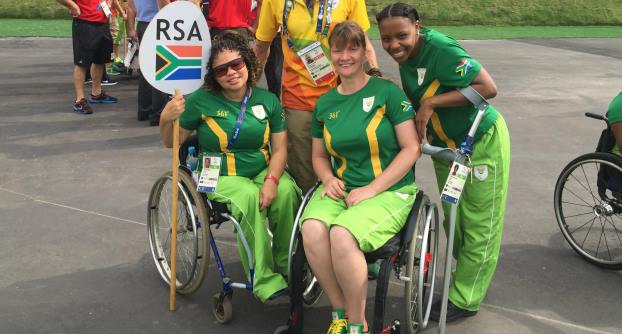 While weâ€™re incredibly proud of our Olympians for their ten medals from #Rio2016, we know that our Paralympic team will give us plenty to celebrate over the period of 7-18 September 2016. Â They’re aiming to beat their 29 medal haul from the 2012 Olympics. Here are six women we expect to do all the things for #TeamSARise at the 2016 Paralympic Games.

KG will be competing in the para-wheelchair tennis section for Team SA at Rio 2016. She is ranked 5th in the world and has 29 singles titles to her name. She participated in both the 2008 and 2012 Paralympic Games, so this year marks her third Paralympics. Montjane is also ranked no 1 in South Africa. She was one of the Mail and Guardian’s Top 200 young South Africans in 2012, and was also the first African wheelchair tennis player toÂ qualify for the prestigious NEC Wheelchair Tennis Masters and Invacare Doubles Masters in 2011. Montjane was born with a congenital deformity of her leg and hands. Her other foot was amputated when she was just 12 years old.

2. Philippa Johnson
Johnson will be representing South Africa in the equestrian section of the Games. She won gold at the 2008 Beijing Games in the individual championship and freestyle test, but did not win any medals in 2012.

3. Chantelle Stierman
Stierman is a powerlifter and will be representing South Africa in the para-powerlifter division. She will beÂ participating in the 61kg category against six other competitors. She recently wonÂ bronze at the International Paralympic Championships that took place in Rio. Stierman suffered aÂ traumatic back injury that resulted in paraplegia. This isÂ Stiermanâ€™s first Paralympic Games.

4. Sandra Khumalo
Khumalo is a rower for Team South Africa. She participated in the 2012 Games in London and was SA’s only representative in the rowing division. This year, she is one of three women representing South Africa in rowing. Khumalo was paralysed in a car accidentÂ in 2005 when her spinal cord was damaged.

5. Ilse Hayes
Hayes is an athlete who takes part in category T13 events which are for athletes with visual disabilities. She won gold in the long jump and silver in 100m in both London in 2012 and Beijing in 2008. Hayes has been named one of the M&G’s Top 200 Young South Africans in 2013, and was also awarded the Order of Ikhamanga in silver from the president. Hayes has a visual impairment with 15% vision in both eyes due to a condition she has had from the age of 11 that caused her eyesight to start deteriorating. She will be representing Team SA in the athletics section of the Games.

6. Alani Ferreira
Ferraira will be representing South Africa in the pool at this yearâ€™s Paralympics. Remarkably, she managed to qualify four times during the national championships earlier this year. Â Ferreira was diagnosed at age 12 with a genetic eye disorder, Stargardt macular dystrophy, which causes a blind spot in the middle of her vision and causes her to gradually lose her central vision. This will be 18-year-old Ferreiraâ€™s first Paralympics.

Click here to check out the full list of Paralympians who are in Rio waiting for their time to shiiiiiine.