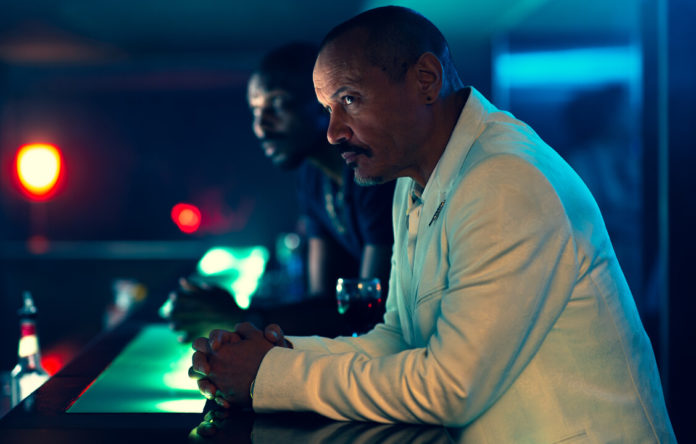 Skemerdans is a neo-noir murder mystery set on the Cape flats, set for release on Thursday, 28th of April. It is set at the Oasis jazz club and follows a struggling businessman Glenn Fortune, his family and various cohorts. Skemerdans’s literal translation is dusk dance; as you watch you will see how this plays out.

I went into the first episode apprehensively. I was expecting a stereotypical depiction of the cape flats and gangsterism; with some styling and better lighting. I was wrong.

Skemerdans opens with shots of Klipfontein road at night. The neon lights shimmer, and it sets the tone that all that glitters is not gold. Glenn Fortune is played expertly by Kevin Smith from Isidingo fame. He is perfectly cast as the patriarch of the Fortune family. His Oasis jazz club is not just about the music and drinks, and we get the feeling something else is brewing. He has a cool demeanour, and you can tell he is the ou, but at the same time seems exhausted and stressed. Loan sharks are circling too, but we know this is about more than defaulting on payments. There are brewing tensions and it’s all done with such trepidation. The atmosphere is heaving and the lighting complements the storyline. You are made to feel in the dark for the entire 30 minutes.

Shot at the iconic Club Galaxy during the October 2020 lockdown, the series follows the Fortune family’s trials and tribulations. Ilse Klink plays Glenn’s wife, Shireen with a very restrained hysteria so indicative of a wife tired of her husband. Brendon Daniels from Four Corners; Vinette Ebrahim from 7de Laan, Binnelanders); Carmen Maarman (Arendsvlei); rising star Trudy van Rooy (Die Byl, Sara Se Geheim) and Ceagan Arendse (Suidooster, Arendsvlei), who tragically passed away in February 2021- round off the leading cast. We will get to see many familiar South African faces in the coming episodes like Sandra Shandu from the Kissing Booth, and comedian Carl Weber.

The co-directors Amy Jephta and Ephraim Gordon have weaved a familiar sound in Skemerdans. The characters speak Kaaps and mix up English and Afrikaans. It is relatable and gives it an authenticity in South Africa that often caricatures the Coloured accent from Cape Town. If I close my eyes I hear my neighbours, family and friends. Jeftha knows how to handle grit; we saw this with her writing work in Ellen Pakkies; a harrowing real-life story about a mother who kills her drug-addicted son.

Jeftha and Gordon have said of Skemerdans “We don’t want to show the mountain or the sea”  This is a fresh take for the film and television world but not the city itself. Cape Town’s underbelly has long existed on blurred lines with how nightclubs are run on profit and fear. Most if not all cape town’s bars and clubs have to pay “security” tax, and those collecting are as underworld as they come.

The aesthetic in Skemerdans is subtle. There are constant shadows all over with little bursts of colour. Tones are hushed and it feels like everyone is speaking as if they are constantly under surveillance; this is genius when wanting to set up anticipation with an audience. You see the cape flats at night had a massive influence on the look and feel. So much that goes unseen in Cape town lives in the crevices of the flats and I have a feeling Skemerdans will show us in later episodes.

Shooting at the iconic Galaxy nightclub invoked so much nostalgia for anyone who goes clubbing in Cape Town. It is Cape Town’s most famous club and has been a rite of passage for many. In the series it seems to be modelled after the West-end club on the same premises that always hosted the more mature and jazz-loving crowds.There seems to be a sense of freedom the filmmakers invoke, that gives us originality. In keeping things more relatable with language use and not showing us touristy Cape Town it will keep you interested.

There are many themes in Skemerdans, but the one I think we will all identify with is Family. All the dynamics and what shapes us starts with family. There is never a real escape or extraction that can happen, especially in the Fortune family. Power is an evergreen theme, and the fight for it makes for riveting drama. The soundtrack is a combination of Cape Jazz; Pacific Express, Jonathan Butler, Paul Petersen, the Schilder Brothers and club music

Gordon and Jeftha are longtime collaborators since their student days, and run a production company; Paperjet. They give us new perspectives on marginalised characters. There is truth and relatability to Skemerdans. Skemerdans is more than binge-worthy, it looks like it will be repeat-watchable.

Read more: The Girl At St Agnes, And The Dark Side Of SA’s Private Schools