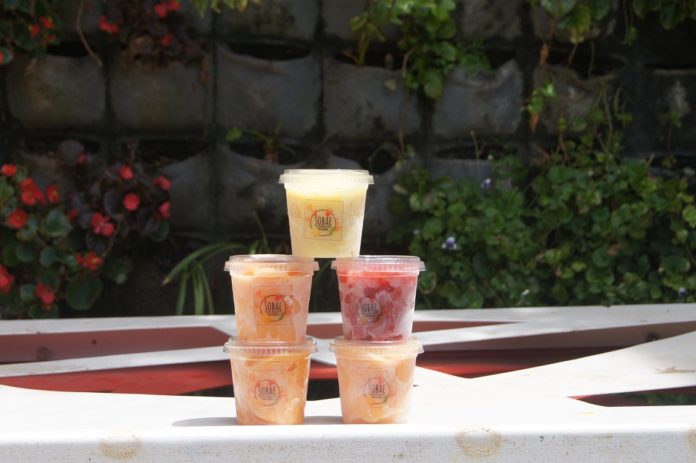 Thula Ndema and Thato Masondo are on a mission to make sorbet eco-friendly. From the streets of Braamfontein to their own space in Victoria Yards, Ndema and Masondo have come a long way. The couple is the brains behind Sobae, a startup that aims to remake the popular dessert.

Unlike ice-cream which is made from milk, sorbet is frozen dessert made from water, sugar, and fruit.

Victoria Yards in Lorentzville, east of Johannesburg, is a haven of art and entrepreneurship. And it’s green too. It’s an exciting space that has re-imagined the detritus of the big city. And it’s here that Ndema and Masondo have set up a permanent base for their sorbet factory. Using fresh, seasonal fruits, their sorbets are all naturally made without any added sugars and preservatives. And they taste good too.

But the story of they how they got here is quite special too.

While working in retail positions in Braamfontein the pair would spend their free time exploring the city. During the explorations, they noticed that fruit and vegetable vendors would often dispose of overripe produce. And as any Jo’burger knows too well, the produce piles up on the sidewalks, leaving behind a stench, and inviting a feeding frenzy for the neighborhood rats. After undertaking some research, the pair realised they could use the overripe produce to produce to sorbet. Not only was it a great business idea, but they would also be solving the issues of illegal dumping and food waste.

It wasn’t a smooth transition to starting their new business, even if they had a great idea, to begin with. While the actual making the sorbet was low-cost, other administrative issues almost stopped them. One of those was transport. Once they had made their sorbet, they had difficulties getting it to market places. Their solution: they bought bicycles to move around the city.

One thing that wasn’t difficult about starting the business was being in a relationship and working together. The pair obviously have a close relationship. While they admit it can be challenging at times, they love working on their goals and achieving them together.

The pair have established relationships with various vendors in the inner city. The vendors provided them with overripe fruits and vegetables. The fresh produce would be chopped and frozen until it is time to make the sorbet. Using herbs and spices, fruits and vegetables are combined to make the final mix. It took a few tries and a good few experiments before Ndema and Masondo were able to get the perfect textures and flavours.

It was in November 2017 that the pair officially launched their sorbet. Out of a small box with three flavours they started trading around the NeighbourGoods market in Braamfontein. Masondo said that when they first started selling their sorbet in Braamfontein, it was a little scary because they had to deal with the security guards who would often chase them away. But they persisted and managed to sell their sorbet to stores within the Braamfontein area.

The pair have since enjoyed many successes since their modest beginnings. Their products have gained popularity and even the royal nod. During the royal family visit to South Africa, Meghan Markle visited Victoria Yards and tasted the sorbet.

The pair are passionate about helping to prevent food waste and illegal dumping in the city. Building on the relationships with the vendors, they want to educate vendors in Johannesburg about ways to properly dispose of the rotten and leftover produce to keep the city clean.

The pair are committed to growing themselves, and the community around them while ensuring everyone gets to taste their delicious sorbet.