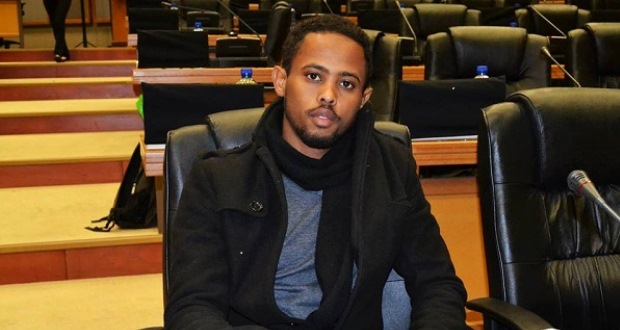 Somali-born Hasan Abdulaahi Maalin, 27, from Soweto, has been living in South Africa for the past few years but has had many problems with renewing his refugee status at the Department of Home Affairs offices. He spoke The Daily Vox about his struggles with his applications.

I am a part of the UJ SRC. So in July we were supposed to fly to America and after that I went with a letter to Home Affairs in Durban. I went to the refugee centre in Durban because Pretoria and Marabastad in Cape Town are too busy. My refugee status originally was from Cape Town and apparently if you are from Cape Town, you need to go to Cape Town. But my application I got in 2015 from Durban had expired so I had to go to Durban. So when I went to Durban, the lady told me, â€œYour application is not with us, itâ€™s with the Cape Town centre and you must go to Cape Townâ€. I told her I canâ€™t go and she said, â€œIf you want me to do your application, you need to pay R3, 000â€. I told I canâ€™t pay and why must I pay. I called the senior manager and said, â€œIâ€™m a student, can you please assist meâ€. Then they asked me questions and assisted me and I applied, and then two days later I was supposed to get an SMS saying your application has been handed in and is processing. But till now my application is still not in the system because the call centre says we donâ€™t have any application, the only application is from 2015.

I went to renew the application during Ramadhaan (July). I was communicating with lots of directors and people from Home Affairs and no response, no assistance, no answer. My question is. in 2014 I applied at the same centre and I will tell you frankly, the lady, I gave her a gift of perfume and now she tells me I must pay her R2, 000, R3, 000. I tell her I cannot pay you. Thatâ€™s why she put my paper in the dustbin and out of the system.

I am here in South Africa for six years and I am a student of UJ. Itâ€™s a disgrace whatâ€™s happening at the Home Affairs. You have to go back five, six times. You cannot go with your colleagues anywhere and you cannot do nothing. I feel hopeless.

I am studying economics and it is my final year. I am part of the SRC. I am a tutor of UJ. I do community work. But unfortunately the Home Affairs treats us like sub-humans. They just tell me to go back and reapply again. They say I must pay R400 and reapply. I communicated with everyone except [minister] Malusi Gigaba.

They always tell me to go to Cape Town and it is very expensive to go there. Thatâ€™s why I had to go to Durban because it was more possible. My initial application was from Cape Town. They tell me they cannot apply for a passport and I have to go back, which is unfair and I asked them why they say that and they said got orders from director. And when you show them constitution which says you can apply anywhere, they say, â€œno, itâ€™s an invitationâ€. So itâ€™s an invitation and I am a student, I must travel to Cape Town.

My colleagues applied for a passport and they got it in four days. It is shocking. I am a human being. I have a friend of mine, his wife is South African and he applied for residency with his wife and he was rejected. And they gave no reasons. And he has child with that wife and both of them are Somalis. The wife is South African but heâ€™s Somali and the boy is a Somali refugee. They rejected the marriage certificate.

I am going crazy because I am student and I know my rights. But I cannot exercise my rights. It is unacceptable.

I am supposed to go to Rwanda for Africa Youth Summit and to Turkey and last year to China. This year, I got the opportunity to go to the White House to be part of a leadership programme. I had an opportunity to go Harvard but I cannot go. I contacted all sorts of people. I tried to go to lawyers. They ask for money, I say I will win the case and you will get money because I know I can win the case.Â I have been directed to so many people in the university with connections to ministers but they all canâ€™t do anything. I donâ€™t know, are we not human beings that we must be treated like this? I donâ€™t understand why I canâ€™t be assisted.

Home Affairs can really make you mad. I sometimes go crazy because of Home Affairs in this country. The happiest time of my life is when I crossed the border into South Africa, but that happiness is not the same.

We are facing three problems: we are Muslim so they call us terrorists, and we are African – we are black – and that place where I come from in Somalia, Al-Shabab will tell us, â€œjoin us or we will kill youâ€. When we come here we are facing different issues. When I got to the location, they tell me to urinate in a bottle, thatâ€™s my toilet and then I donâ€™t have papers to exercise my rights. I am one of those who are struggling to make it in this world.

They ask me why I came here, I said for education. I worked by Shell and Pizza News. I got a job so I could learn English. I became a tutor. I formed a new political party. I wanted to create a space in the political sphere. I contested against SASCO. I got 200 votes.

I became a tutor and my life becomes better, better. My life is improving. I never used to earn and now I earn more than I used to earn in the book shop. From tutoring, from SRC, from the Somali community. I help them and they love me. Before I never had family, now I have a family. Everyone at UJ is my family.

I fight for the rights of the poor, including myself.