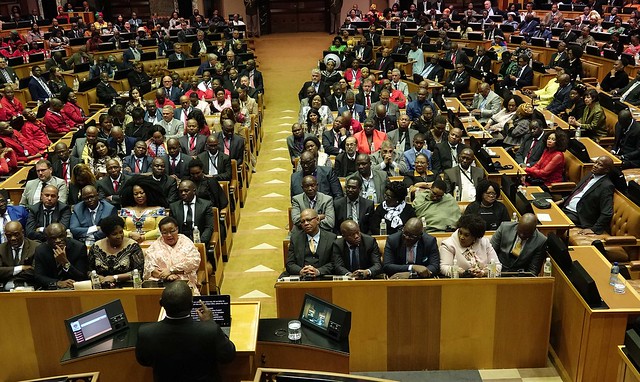 Cyril Ramaphosa gave his second State of the Nation Address (SONA) on Thursday, after being elected president of South Africa on June 20. The entire process went off smoothly yet his speech left a lot of questions unanswered. SONA is meant to act as a guide for the policies government is going to pursue to make the country a better place. However, all his speech seemed to do is tell South Africans to “ begin imaging this prospect.”

The Daily Vox team takes a look at whether Ramaphosa made any changes since his February SONA and what he’s achieved so far.

During the February speech, Ramaphosa ended off his speech quoting Theodore Roosevelt saying: “It is not the critic who counts; not the man who points out how the strong man stumbles, or where the doer of deeds could have done them better.”

In June he turned to the words of author Ben Okri saying: “ Will you be at the harvest, Among the gatherers of new fruits? […] Press forward the human genius. Our future is greater than our past.”

This is what his speeches said about women and youth.

Mentions of women and fighting gender-based violence decreased significantly from the February speech to the June speech.

During the February SONA, Ramaphosa said his time as president was spent paying “particular attention to the violence and abuse perpetrated against women and children in our society.”

He mentioned the Presidency’s convening of the the daily vox National Summit on Gender-based Violence and Femicide. This summit took place in 2018 and ended with a resolution being signed by the Presidency, the Total Shutdown movement and other civil society members.

The summit was part of 25 demands that were presented to the President on August 1 by the Total Shutdown movement. The movement called on the presidency to take a firmer stance on responding to the national crisis of gender-based violence and femicide.

The President also admitted in February that “violence against women and children has reached epidemic proportions.” He also announced that work was underway to implement the National Strategic Plan on Gender- Based Violence.

He pledged to dedicate more funds to places of support, such as the Thuthuzela Care Centres and Khuseleka Care Centres.

Yet health journalism platform Bhekisisa revealed that “More than half of the country’s Thuthuzela Care Centres (TCCs) are without counselling services or have been forced to rely on one or two social workers to comfort victims of abuse months after they lost international donor support.”

So while the presidency has made good on part of his promises (40% of the country’s 55 centres have had their international funding renewed), most facilities don’t have funding.

On Thursday night, the only mention the president made of gender-based violence was to say the government were still working towards the “establishment of the Gender Based Violence and Femicide Council and a National Strategic Plan.”

He said there was a hope that this plan will guide the government to eradicate this scourge of gender-based violence but no deadlines were given.

Continuing with his theme of creating youth employment, in February Ramaphosa announced that the presidency launched the “Youth Employment Service, which is placing unemployed youth in paid internships in companies across the economy.” He called on all companies to participate in the initiative.

On Thursday he announced a decade long plan that would seek to halve youth unemployment. Ramaphosa promised in his speech to proceed with the implementation of a comprehensive plan “to create no fewer than two million new jobs for young people within the next decade.”

With regards to students and universities, in February when Ramaphosa delivered his SONA, there were multiple students protests around the country. At the time he called on “student representatives and university authorities to work together to find solutions to the challenges that students are facing.”

According to Ramaphosa the “scheme is being phased in over a five-year period until all undergraduate students who qualify in terms of the criteria can benefit.” He also said stabilising this National Student Financial Aid Scheme (NSFAs) to better carry out its duties would be a priority.

Just a day before he delivered the June SONA, students in the Western Cape marches to the NSFAs offices. They demanded clarity of the many funding issues still plaguing students. These include historical debt, payment of funds, and a lack of sufficient accommodation.

While he made mention of increasing student accommodation, Ramaphosa didn’t address any other student issues including the free education.

Mr President needs to realise tackling the economy is not going to be a magic wand to solve all of the problems facing South Africa.

Gender-based violence faced by women and gender-nonconforming people needs a lot more action than just a line in a speech. It is also disingenuous of the president to (kind of) completely erase all the groundwork done by activists and civil society which forced the government and presidency to be aware of the hugeness of the problem.

With young people, Ramaphosa keeps promising that he is going to solve youth unemployment. But once again the solution is not as simple as creating more jobs. There is a systemic problem at hand of inequality and racism which prevents many young black youth from getting jobs. With free education, the president doesn’t even mention it. This shows a startling lack of awareness of the persistent funding problems university students are facing. There is no free education and has never been.

The president needs to realise the actual issues facing South Africans and deal with those.