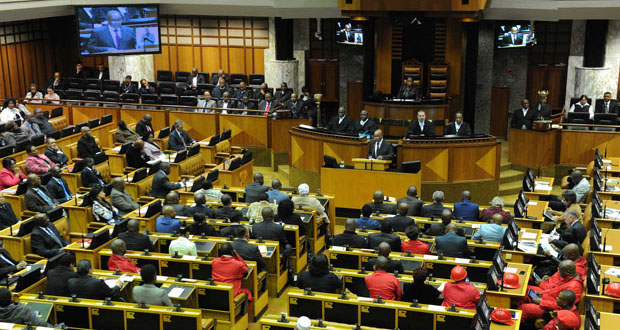 President Jacob Zuma is set to deliver the State of the Nation address tonight. The DAILY VOX TEAM went out to ask citizens about the issues they hope he will address and the action they hope to see from the government. Johnny Solwa, 31, head barman at a restaurant, Khayelitsha
These parliament members donâ€™t care. They donâ€™t give a shit about us. They are getting paid big money. If I can speak to Jacob Zumaâ€¦ If I can talk to that guy, thereâ€™s a lot I can say. He says thereâ€™s going to be free education: whereâ€™s the free education? I went to CPUT [Cape Peninsula University of Technology] to register for my first year. They tell me I must I give R2,500 upfront for the registration fee. I didnâ€™t have that kind of cash. Then I went to the Department of Education, they tell me I must bring my motherâ€™s documents to say she is not working. There was so many papers, so I said itâ€™s better if I work. Now, I feel like itâ€™s a waste. Primary school is good, but tertiary is bad for us. Thereâ€™s too much corruption in this South Africa. Khaya Kwenteni, 32, music store assistant, Khayelitsha
Theyâ€™re supposed to finish building those two power stations â€“ Medupi and Kusile. We need more power stations because when the electricity goes out, businesses are affected. We have to close the shop, because we canâ€™t do anything. The computers go off, so we canâ€™t process payments, and this a music store. When we close the shop, I worry a lot. We need our customers. At home, I canâ€™t cook: the fridge goes off with meat inside, and thereâ€™s no hot water. When thereâ€™s no electricity in Khayelitsha we have to prepare ourselves because we will get robbed. Itâ€™s dark, so people will take their chances to steal. They have an advantage because we wonâ€™t see them. Every year at the State of the Nation address, Zuma goes there to make promises, but nothing happens. Ntlantla Dnanini, 35, screen printer, East Rand
I don’t feel safe around the police. They’re there to police for the government and we as citizens get the raw deal. I’ve witnessed so much crime in ghettos â€“ even murders â€“ and they stay unsolved. My neighbours had a domestic violence issue â€“ and instead of arresting the man who beat up the woman, they just told him to stop. And this woman was really badly beaten up â€“ child and woman abuse remain a problem in this country, and Mr Zuma will do nothing about it. He is not the president of the people, but of the corporates. We stay left in the dark to deal with our issues â€“ and as a result, Iâ€™m sure we could even have a civil war soon. Noluthando Tshata*, 38, general worker, East London
I donâ€™t like having to live in a shack, but my circumstances have led to me having to live in a shack, in the new area we call Egoli. I moved in November and the conditions we live under are really frustrating. We donâ€™t have connections to electricity, since we are gathered and living there illegally. We pull electrical wiring by force; people make their own illegal connections because we need to have power. We donâ€™t have toilets: we dig out our own toilets at the back of our shacks or use buckets â€“ so you can just imagine how unhealthy the life we live there is. I cannot afford to rent with the amount that I earn, so I hope government will assist us in these situations. We build shacks closer to towns because we want to be closer to work, so we need government to build us houses that are within the city, because transport is unaffordable. Dave Brown*, 73, pensioner, East London
I went to Frere Hospital to get medication for a friend who was admitted there and could not fetch the medication himself. I sat in that dispensary line for two whole afternoons. And after that I said, â€œforget it!â€ Itâ€™s ridiculous; I donâ€™t know what these poor people have to do. And the nurses donâ€™t even care about you, they will just tell you to sit in the queue and wait your turn. Everyone knows, everyone complains, but nothing will change. [Zuma] is going to make a speech but nothing is going to change, because all he does is talk. If you go there to see a doctor, you sit there (Frere Hospital) all day, waiting to be helped. I donâ€™t use Frere anymore or any other hospital for that matter because they are useless. I would rather just die in peace in my bed.