Home The Agenda #SONA2017: A fist fight, screaming of delinquency and horses before Zuma even...
WhatsApp
Facebook
Twitter
Email
Print 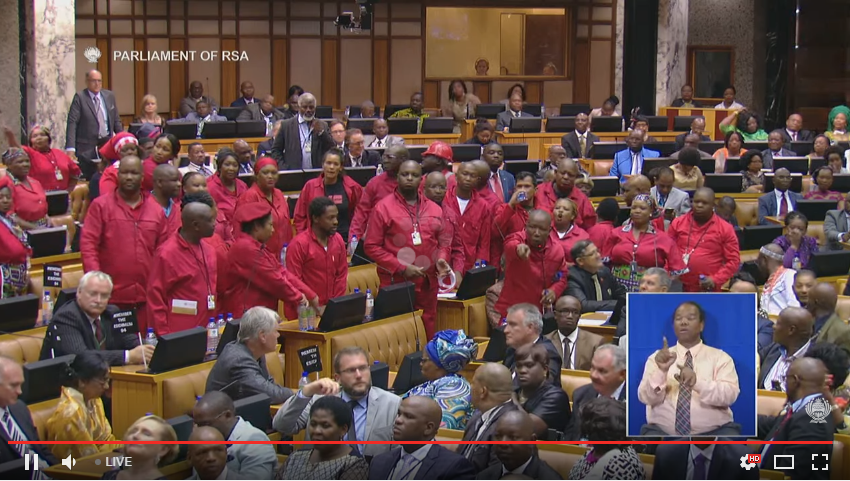 As expected, the opening of parliament on Thursday evening was off the hook. It started even before President Jacob Zuma took the podium. First, the DAâ€™s John Steenhuisen asked the Chair of the house to take a moment of silence to commemorate the deaths of 94 mentally ill patients after they were moved from Life Esidimeni to unlicensed NGOs. Then the EFFâ€™s Julius Malema and â€˜Terrorâ€™ Lekota called Zuma to step down. But there was more. Hereâ€™s a quick selection of the madness while Zuma was waiting to talk.

1. The DAâ€™s call for a momentâ€™s silence for the 94 mentally ill patients who died in 2016. Speaker Baleka Mbete refused, without reason. She suggested it could be done next week.

Retweet if you think The Madam Speaker has been unconstitutional.#SONA2017

2. When Julius Malema called out Zuma for being â€œan incorrigible man, rotten to the core.â€ Malema was on top form. His overall also looked tailored. After Malema was done, Cope leader Mosiuoa â€˜Terrorâ€™ Lekota went on to call the president a â€œscoundrelâ€.

3. When Mmusi Maimane agreed that the Constitution had been violated, but stated that the State of the Nation Address should continue so we can â€œget back to the peopleâ€™s business.â€ Trying to be the voice of reason, or ignoring the real questions?

4. The peopleâ€™s bae, Mbuyiseni Ndlozi, said he hadnâ€™t invited the protection services guarding the door. He called Zuma a constitutional delinquent and a criminal. He specifically asked for the two guards to get out, along with Zuma.

5. Julius Malemaâ€™s accusations against Baleka Mbete were hectic! He accused her of being partisan and said that President Zuma used her and dumped her. â€œYou were suggested as the next president of the ANC but then you went home and slaughtered a cow!â€

#EFF #Malema "You are so prepared to chase people who violate the rules but keep a man who violates the constitution." #SONA2017 #eNCA

6. Julius Malema and the rest of the EFF were thrown out of Parliament, pretty violently, on Baleka Mbeteâ€™s orders.

I'm waiting for the EFF to be thrown out just so that I can hear Malema say
"CASH ME OUTSIDE!
HOWBOUDAH!"#SONA2017

7. A literal fistfight ensued between the protective services and EFF members. Absolutely violent, and absolutely undemocratic. The EFF was kicked out. The DA walked out. Members in the gallery gassed. Grown adults clapping and shouting at other adults to â€œvokoffâ€. An absolute mess.

Why the fuck are adults clapping after seeing other human beings get brutally dragged out like animals????!!!! #SONA2017

Zuma was pretty much left to address the ANC alone.

And there you have it. Second year in a row #Zuma will deliver his #SONA2017 to ANC members only.Could have held it at Luthuli Hse. Shocker.