Home Features The Sophiatown Play Was An Opportunity For Us To Go Back To...
WhatsApp
Facebook
Twitter
Email
Print 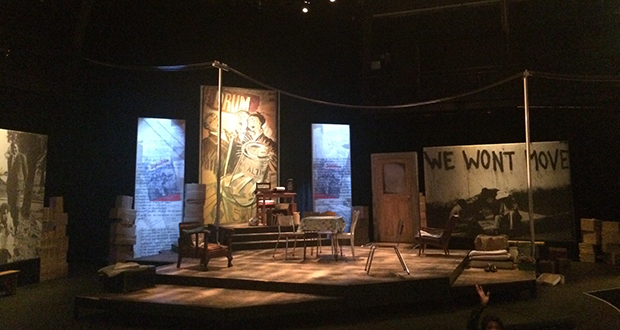 “Ons dak nie, ons phola hierso”. Almost three decades since its debut, the Malcolm Purky directed musical Sophiatown is back at the Market Theatre with a new cast. The iconic play gives a peep into the lifestyle of “Kofifi” in the 1950s before the forced removals to Meadowlands. For a few moments, MBALI ZWANE was transported back to Sophiatown.

â€œThe bulldozers were just hired killers; they flattened peopleâ€™s homes in minutes. They destroyed a spirit, a culture, and a rich heritage that had been built up over generations. But they could not remove peopleâ€™s dignity or their memories. The story of forced removals will be told for many generations to come. The pain cannot be ignored.â€

When I think of Sophiatown, I picture myself as a Drum magazine pin-up girl with a slim figure and a cigarette in my hands with a glass of whisky, sitting in a Jazz club with the Drum Four while Dolly Rathebe sings in the background. Known as Kofifi, Sofiatown or Sophia, the surburb was the hub of black writers, musicians, activists and intellectuals in the 1950s. It was the apartheid government’s yearning for a racially segregated country that ended it all in 1955.

Based on a true prank in which Lewis Nkosi and Nat Nakasa advertised in Drum magazine for a Jewish girl to come and stay with them in Sophiatown, the play, centred in the house of Mamariti and her shebeen, embeds questions about race and identity, the relationship of music and politics, and between writing fiction and politics. Shebeens were political spaces, a boardroom of sorts where meetings and protests were planned and politics discussed.

Mamariti, the shebeen queen, is the mother of Mingus, part of the infamous Americans gang and Lulu, a cheeky 16-year-old fed up with Bantu education. Writer and aspiring intellectual Jake rents a room in Mamariti’s house while he waits for his big break: a two page feature in Drum magazine. The pages of the magazine carried the stories of the people of Sofiatown – from the swinging night life and pin-up girls to the political mayhem of the time. Together they live with Mingus’s girlfriend Princess and his trusted side-kick Charlie, who hardly says a word throughout the play. Jewish bohemian girl Ruth Golding from Yeoville comes to stay with them after seeing the ad.

The play highlights perspectives of people who were involved in everyday acts of resistance and organised protests against the apartheid regime. “Ons dak nie, ons phola hierso [we won’t move],” sang the cast, a song of resistance as families watched their homes being destroyed. The a capella harmonies resonated with me, having grown up in a community where these songs were sang to reminisce about the strength and bravery of everyday heroes who put their bodies on the line for liberation.

Perhaps the real reason I watched the play was to revisit those memories, the good and bad of Sofiatown, and be present in the moment. I have read articles and books about Sophiatown, searching for information and memories that I couldn’t find in my high school history textbook. I had hoped I’d find the connection between politics, music – particularly Jazz – among South African black people and the African-American influence.

After years of searching, as I watched the cast speaking in tsotsi taal and bringing their characters to life on stage, I found the answer. The play is a perfectly composed interpretation of Sophiatown, past all the jazz and glamour. Purky has revived a strong portrait of a household trying to stay together in the face of forced removals and what that means for their friendships, loves and, most importantly, culture. For a moment I think I understood what it meant to be black born in a place where both group and individuality are shaped by external circumstances founded in socio-cultural models rather than traditional black affiliation and tribal structures.