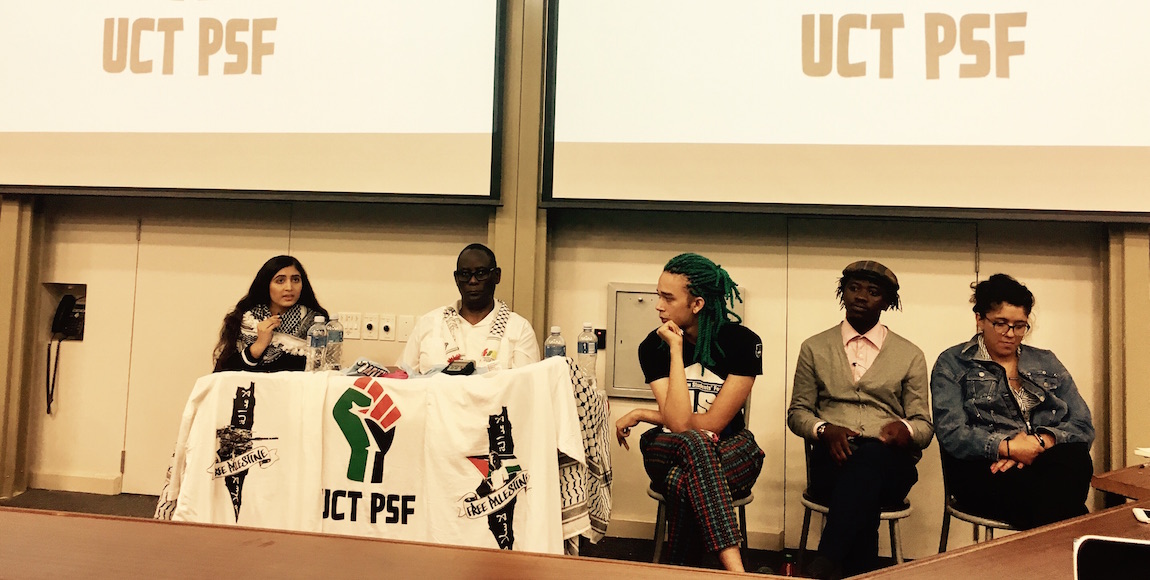 At a panel discussion on Tuesday hosted by the University of Cape Town Palestine Solidarity Forum, the issues of race, settler colonialism, and Palestine were the topics of the evening. Host Alexandra Hotz emphasized at the beginning of the evening that it was crucial to bring up the reality that Palestinian solidarity was the only time some took any interest in social justice – local concerns, tragedies on the continent, and injustices elsewhere were ignored. While the discussion covered a broad range of issues, a recurring theme of the night was the moral inconsistencies within South Africans Indian Muslims with narrow interests in injustice.

Writer and queer activist Nigel Patel, began the evening speaking on Israeli pinkwashing, which they described as the co-opting of LGBTQIA+ people by white anti-immigrant and anti-Muslim political forces.

â€œPinkwashing in Israel has been a project to use LGBTQ rights to distract from and normalise Israeli occupation, settler colonialism, and apartheid,â€ said Patel. Patel argued that this co-option was a deliberate attempt to sanitise Israeli brutality and erase the queer activism that takes place within Palestine, such as Palestinian Queers for Boycott Divestment and Sanctions (PQBDS).

Dr Natasha Vally described how normalised imprisonment of Palestinians was under Israeli tyranny. An estimated 6 500 Palestinians are currently imprisoned, with nearly one in every two Palestinian men experiencing an arrest by Israel in their lifetime.

Vally said these high figures, representing the incarceration of indigenous people, were consistent with other settler-colonial countries such as Canada and South Africa, where native populations make up a disproportionate prison demographic.

Pan-Africanist Jackie Shanduâ€™s presentation focused on the nature of settler colonialism and how it was unfortunately not a unique occurrence in Palestine. In Canada, the US, Australia, New Zealand, and counties across Africa, Shandu said the scourge of genocide, dispossession, and institutionalised inequality were hallmarks of settler colonialism that spoke to the Palestinian situation – intrinsic to all of these for Shandu was the question of land. He however took issue that much of African solidarity with Arab circumstances was not reciprocated. He argued that Arab racism towards black Africans – something he said was exemplified by the slave trade of black people in Libya – came in the way of true solidarity between the oppressed because black Africans were being dehumanised from fellow Arab-Africans. He called for an understanding among â€œthird worldâ€ countries against the common enemy of white supremacist capitalist imperialism.

Shandu ended his contribution by problematising that Israeli Apartheid Week seemed to be the only time during the year that Muslim Indians in South Africa took political interest in matters of social justice, simply because it involved their faith. He said this was completely unacceptable and undermined solidarity between the oppressed.

Prominent FeesMustFall activist Shaeera Kalla agreed with Shandu on the issue of many Muslim Indians in South Africa only being interested in issues regarding fellow Muslims – and remaining silent or antagonistic towards the struggles of fellow South Africans and others from the continent. She said that as someone who was intimately involved in activism across spectrums, it was a matter within the community that was being addressed. She said part of the hypocrisy was that such people would speak about the ills of settler colonialism in Palestine yet not see the parallels to the South African land question.

â€œThereâ€™s no way that I can make sense that the Indian Muslim community can say that Palestine should be free from the river to the sea, when they canâ€™t see that land needs to be given back to African people in South Africa,â€ said Kalla.

Zwelinzima Vavi, the general secretary of the South African Federation of Trade Unions (SAFTU) gave the final presentation, painting a broad outline of the history of South African-Palestine relations going back to the days of apartheid. Vavi said that as survivors of imperialism, colonialism, and fascism, we as South Africans had learned to identify it elsewhere and stand against it wherever it reared its head – thus South African solidarity with Palestine was a fundamental aspect of South African politics.

â€œThe existence of oppression anywhere in the world is a threat to stability anywhere in the world. We want peace in our world, but Chris Hani taught us that we will have to fight for that peace, and it is in this context that we as workers hold the people of Palestine in special regard,â€ he said.

Vavi called for trade union across the world to take up the call for divestment and sanctions against Israel and supported the UCTâ€™s PSFâ€™s stance for an academic boycott of Israel.