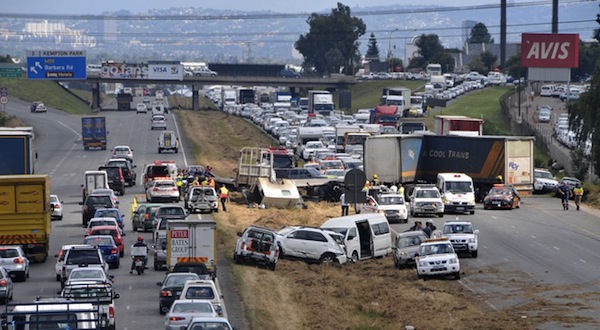 As Isaac Wade Maruding,Â the truck driver who ploughed through traffic on the N12 inÂ theÂ shocking 47-car pile-up that injured 16 and killed four, prepares for another legal battle, we are reminded that, with a road death rate of 31.9 people per 100 000, South Africaâ€™s roads are among the deadliest in the world. The question is, why? RA’EESA PATHER reports.

The high level of car ownership in the country bears some responsibility.Â In the past 10 years, car ownership in South Africa has risen almost 10% to 32.6%. As roads become increasingly congested, the risk of traffic accidents increases. Â But this does not tell the full story.

â€œWe do not compare favourably with even other developing nations in the world, so weâ€™ve got a serious problem on our hands and money canâ€™t buy change,â€ Ismail Vadi, Gauteng provincial minister for roads and transport, said.

â€œThe carnage on our roads is just unacceptable.”

Government is well aware of the dire situation concerning SA’s exceptionally high number of road deathsÂ â€“ after all, road accidents cost the economyÂ R300-billion each year. According to Vadi, Transport Minister Dipuo Peters is currently reviewing the National Road Safety Strategy, while the provincial transport department is working with communities to update existing strategies.

But not enough is being done to change things. Maruding was a repeat offender, with prior convictions for reckless and negligent driving, and culpable homicide. So why was he back on the road again, driving a heavy vehicle with the potential to kill or injure so many?

Tuesdayâ€™sÂ crash was allegedly caused by a brake failure, and Vadi says that traffic officers must be more attentive and plan for more random testing to ensure vehicles are roadworthy. Policies that allow big trucks to travel during peak hours could also be up for review.

Vadi believes that greater public awareness, road safety advocacy and stronger law enforcement is required to strengthen road safety. But, he said, at the root of the devastation is a need for â€œan attitudinal and a behavioural changeâ€.

A law enforcement system rife with bribery and corruption has fed into a culture of disregard for traffic laws and law enforcement. Why obey the speed limit or blood alcohol limit, when you know you can bribe the officer who pulls you over and avoid a fine?

â€œWhat is happening is not just about a lack of respect or people driving dangerously, I think a lot of it is about ignorance. People do not understand the basics [of road safety],â€ she said.

South African driving laws are also not strict enough and have failed to prevent the kind of dangerous driving habits that would be considered illegal in many countries.Â The speed limit in South Africaâ€™s residential areas is 60km/h and even this is often exceeded. Meanwhile in Australia the top speed allowed on residential roads is 50km/h.

While South Africans can travel at up to 120km/h on designated roads, in the UK drivers may not exceed 113km/h on highways, while in urban areas they may only drive at a maximum speed of 30km/h.

As one hard-hitting British road safety advert pointed out, pedestrians have a much greater chance of survival if hit at the lower speed. Driving at the speeds that are considered acceptable on South Africaâ€™s residential roads meanwhile is significantly more likely to kill.

Poverty in South Africa has also played a role in what is considered acceptable on the roads. Itâ€™s considered normal to transport workers and schoolchildren on open-backed vehicles in South Africa but in most nations this is illegal. Just last year 15 people were killed, including three children, and 28 injured when a bakkie crashed into a bus in Rustenburg. Still, the law allows people to ride on the back of bakkies.

Likewise, car seats and boosters for babies and young children are still not reliably used in South Africa. While countries like Sweden mandate rear-facing car seats for children up to the age of four, many South African babies and toddlers still drive on mumâ€™s lap.

According to Dr Sinclair, financial constraints have prevented government from changing the law, because too many people in the country are unable to afford alternative vehicles to transport workers. Car seats too, are often seen as unaffordable, leaving national road safety in a catch-22.

At a base level, in order for roads in South Africa to become safer, drivers need to know about how dangerous they are in the first place.

â€œWeâ€™ve allowed a culture of bad driving and bad habits on the roads for so long that itâ€™s now become acceptable,â€ said Petro Kruger, director of the Road Safety Foundation, an initiative that seeks to reduce road accidents and fatalities in South Africa.

â€œNow, itâ€™s not only about a law enforcement change, we need a culture change within our driver community,â€ he said.

While Kruger says that law enforcement officials need to ensure that drivers are licensed and vehicles are roadworthy – particularly freight vehicles, which are often overloaded – there is more need for road users to be re-educated.Â Speeding, cellphone use, and a basic lack of awareness has helped shape a driving community that puts itself at risk.

This weekâ€™s N12 accident was not a rarity – thousands of people lose their lives on SA’s roads each year. Â The question is, are South Africans ready to change their ways?