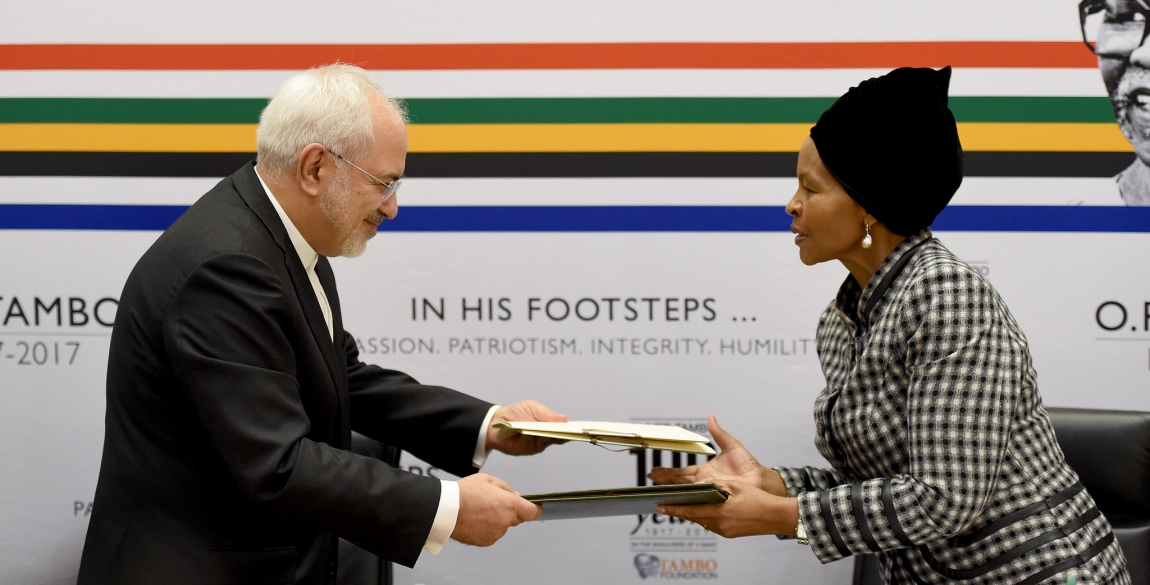 Bilateral ties between South Africa and Iran are at an all time high, but who is really setting the agenda, asks Muhammad Sheik.

Two weeks ago reports that a high level Russian delegation had landed in the country sparked rumours and further debate over the proposed nuclear deal. Questions were asked about whether President Jacob Zumaâ€™s most recent cabinet reshuffle, and the installation of David Mahlobo as the new minister of energy, is in fact an attempt to fasttrack the process, which has now been reported as a political decree from the Kremlin.

Iranian Foreign Minister Mohammad Javad Zarif was in South Africa, heading a political and economic delegation. According to Iranian Foreign Ministry spokesperson Bahram Qassemi, Zarif undertook the trip to Pretoria at the invitation of South African Minister of International Relations and Cooperation Maite Nkoana-Mashabane. A number of politically significant issues were on the agenda.

According to the department of international relations and cooperation (Dirco), the purpose of the 13th joint commission is to consolidate and track progress as well as implement the agreements between South Africa and Iran.

The department of trade and industry, together with its Iranian counterparts, hosted the South Africa-Iran Business Forum at the Dirco offices in Pretoria on Monday, 23 October. According to reports, held talks with Zuma and his counterpart Nkoana-Mashabane.

This trip however is far more politically consequential than we may realise. From both a global and regional perspective, the visit of a role player as influential as Zarif is crucial in sustaining the historically strong bilateral relations between Pretoria and Tehran.

This cosy relationship between the two states is not without its share of scandal. Prior to the re-establishment of ties with South Africa in 1994, Iran had several dealings with the National Party government. Under the Pahlavi regime ties with the apartheid government were warm. After Reza Shah abdicated in 1941, he exiled himself to South Africa and died in Johannesburg in 1944. His son, Mohammad Reza Pahlavi visited South Africa during the 1970s where he was received by then Prime Minister, BJ Vorster.

In 2015 Guardian journalists Seumas Milne and Ewen MacAskill, in an exposÃ© of intelligence activities carried out against The Islamic Republic of Iran by the United States and its allies, clearly show how South Africa pandered to the United States in increasing monitoring and surveillance on the Iranian Embassy in Pretoria. Despite this, a leaked dossier of 128 pages by South African Intelligence has emphasized that the role played by Iran in the country with regards to any alleged covert operations has been greatly overstated with Iranian influence on the African continent being restricted to regions with significant Shia communities. Milne and MacAskill state the rationale used was simply â€œto tighten sanctions and hamper Iranâ€™s nuclear progress, including blocking access to scarce mineral resources in Africa. The worldâ€™s foremost superpower and its allies are trying to force Iran to reach a deal on its nuclear programme.â€

Despite continued clandestine operations between some of the worldâ€™s largest spy agencies against Iran, ties between Pretoria and Tehran have flourished since 1994. Iran is a powerful and influential global ally to South Africa which occupies a strategic position on the African continent geographically, politically and economically. It is the second largest economy in the Middle East region in terms of gross domestic product totaling US$438 billion in 2016 and, with 80 million people, the largest market in terms of population. It ranks second in the world in terms of natural gas reserves and fourth in proven crude oil reserves.

The MTN Group has a 49% stake in government-controlled MTN Irancell, the second-largest mobile phone operator in Iran with 21% of MTN’s subscriber base coming from the country.

Sasol even briefly participated in a $900-million polymer joint venture with the Iranian state-owned petrochemicals company Arya Sasol Petrochemical, which was among the worldâ€™s biggest polymer projects at the time. As of August 2013, however, Sasol had sold its stake in the Arya project. It said in a statement, â€œAs a result of this transaction, Sasol has no on-going investment in Iran.â€

This is not to say that economic ties between South Africa and Iran have soured. On the contrary, bilateral ties continue to grow at a rapid pace, with Iran now looking to South Africa to support its right to develop nuclear power for peaceful purposes. Iranâ€™s ambitious nuclear enrichment model has been impressive to many states globally, especially as its own indigenous expertise is almost completely responsible for the research and development of the countryâ€™s nuclear capability.

Securing support on the international stage from South Africa shouldnâ€™t prove too difficult for Iran as during the 12th meeting of the South Africa-Iran joint commission held in Tehran in May 2015, Nkoana-Mashabane was vocal in condemning the imposition of sanctions against Iran (prior to the Iran nuclear deal), referring to them as “irrational and illegal“.

Global suspicion of Iranâ€™s allegedly sinister nuclear objectives, pushed by the United States, has done little to taint ties between Tehran and some of the biggest global players. Strong diplomatic ties with Russia, China, Turkey and smaller but nonetheless important partners like South Africa allows Iran to continuously punch far above its weight in the international arena, which is a constant slap in the face to US power. As history has shown, be it sanctions due to alleged violations of international law, condemnation from major world bodies or incurring the displeasure of the US, any vacuum left by one state will quickly be occupied by others.

Muhammad Sheik is a masters researcher in International Relations at UKZN specialising in Sino-Iranian relations and is also a radio producer and broadcaster.