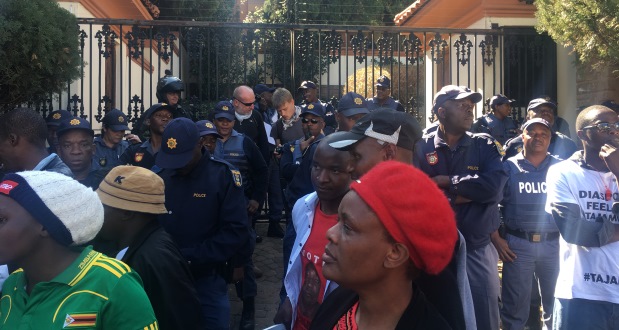 JACQUELINE TIZORA asks why, considering our interlinked histories, South Africa has displayed through the course of #ZimShutdown2016.

Recent unrest in Zimbabwe has seen police, governmentâ€™s life-size puppets, use brute force to silence and oppress a nation that has been quiet for too long about their nationâ€™s state. Amidst Zimbabwe shutting down completely, protests have engulfed the country with participants from all sectors uniting. International media has been very quiet on the issue. More unsettling is the silence that South Africa, Zimbabweâ€™s neighbouring country, has displayed. Almost as if Zimbabwe was not frontline fighter South Africaâ€™s liberation struggle less than forty years ago.

A newly independent Zimbabwe chose to uplift its neighbouring country, despite having its own economy to grow after defeating British colonial rule.

Zimbabwe even took bombs and bullets from the apartheid government for supporting the ANC. Zimbabwe, as young as it was in the 80s, and its leaders, felt like they could not simply watch on as their neighbours were fighting the same enemy they just defeated – white minority rule.

During apartheid, Zimbabwe blatantly defied the apartheid government by offering political, material and moral support to South Africa. The country was vocal about isolating the regime and requesting that the international community divest and boycott South African business and trade as well as impose mandatory sanctions on the state. It was peaceful, yet powerful protest, that hoped to force the apartheid government to liberate black people by sending the economy plummeting. This proved evidently successful.

With a quick glimpse into the two countriesâ€™ histories, one will easily find that the two countries share more than a border. At some point, the ANC and ZAPUâ€™s (Zimbabwean African Peopleâ€™s Union) military divisions were once so incorporated that the two national parties had a joint high command. Zimbabwe also offered exiled ANC members refuge and helped Umkhonto we Sizwe soldiers cross the border and to reach the ANC base camps set up further north in Tanzania and Zambia.

Now, less than forty years on, South Africans are burning Zimbabweans and African foreigners in Afrophobia attacks. South Africans are currently watching on as Zimbabwe burns during national protests and Zambia in pre-election unrest and violence. South Africans either have very selective and short term memory loss or do not know and were never taught the immense role the international community, but more so the frontline states (neighbouring countries) played in its liberation. It did not happen in a vacuum with Nelson Mandela in it, like what schools teach.

The cause for the Afrophobia attacks is the ancient old â€œThey are stealing our jobsâ€ statement. With rising unemployment rates, immigrants are easily scapegoated as the root of it all. This is despite the reality being that Zimbabweans, the largest immigrant group in the country, only make up 1% of the entire population. This means that with a current 26.7% unemployment rate, foreigners cannot possibly be stealing jobs that are not there. The perceived competition that natives are at with foreigners for employment is often felt by those suffering most from the current economic status. The government is evidently at fault for not looking after its citizens and making job creation their mandate, because the victims of the countryâ€™s economic situation are also the perpetrators of the violence. This seems like an obvious starting point as it is prognostic too. Instead of fanning fires by waiting for Afrophobic violence to be at its peak or have garnered international coverage before intervening.

Furthermore, South Africans seem to have a very narrow view of the continent at large. South Africans think that the country is the most developed on the continent, and the land of milk and honey. This is not true at all, as Nigeria has the largest economy on the continent and the Seychelles is the most developed African country. South Africa, despite its size, also does not have the most immigrants on the continent. So, where could this elated patriotic view come from? I think despite the country having a largely colonised education system, which is largely to blame, the issue dates back centuries. Since 1652, South Africa has been a European outpost right up to apartheid, and even now remains one. A lot can be said about the fact that Europeans feel at home in South Africa. Why wouldnâ€™t they? From the street and neighbourhood names to the architecture, Cape Town is Europe. It is not unusual that South Africans see this country as better, as it is closer to European standards, than the rest of the continent. Their surroundings and their history have conditioned them to see their country as not theirs but as one large European convenience store.

Despite appearance, South Africa is and will always be a part of Africa. Even a tectonic shift that would cause it to break away from the continent cannot change this. South Africa and Zimbabwe are inextricably geographically and politically linked. Given the history and sacrifices Zimbabwe made in the past, South Africa cannot afford to burn its citizens seeking asylum in the country as the rest of the country watches on and as it becomes uninhabitable even for those lucky enough have found jobs. Zimbabwe has needed South African intervention, or at least open welcoming of asylum seekers since it started experiencing inflation problems more than 16 years ago and six years after having helped liberate South Africa.

This patriotism, based on Eurocentric standards, coupled with lack of education on how its liberation came to be has proved to be a deadly mix. This means that the education system has either failed in a major way by not teaching South Africans that South Africa is not a product of Europe, but is in fact a product of African unity. This is easily the most important part of Southern African history. Or then again, maybe it is being taught, and South Africans are just unable to keep up with country name changes like Northern Rhodesia and Southern Rhodesia being changed to Zambia and Zimbabwe respectively. Maybe that is the reason why South Africans are killing Zimbabweans; they might not know that Zimbabweans are the same Southern Rhodesians that offered them unconditional refuge.