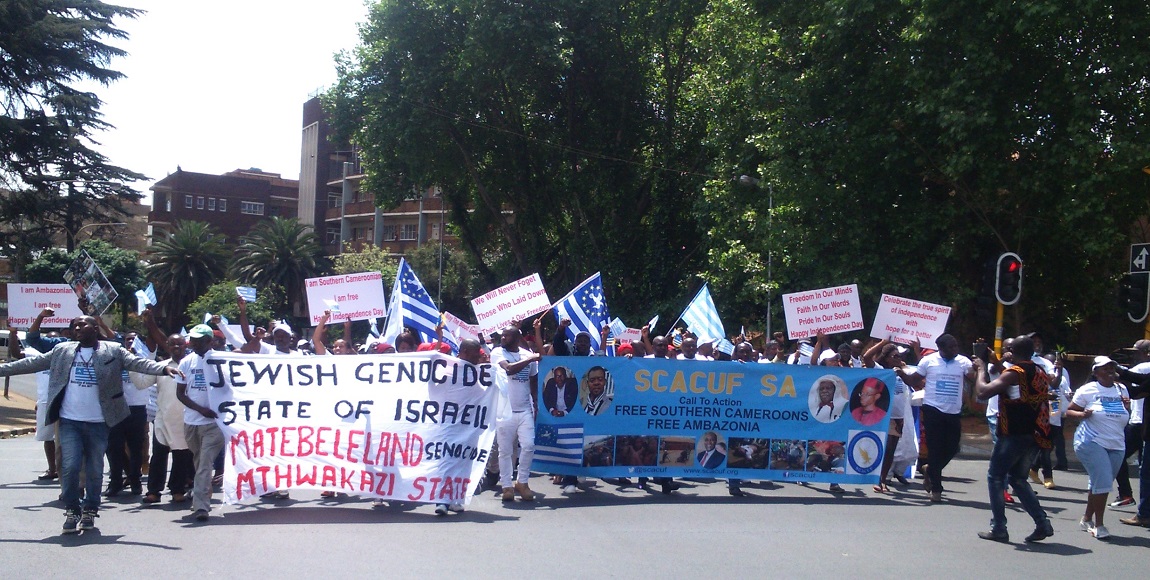 October 1 is a day of liberation and freedom for the peoples and territory known as Southern Cameroons. Anglophone Cameroonians gathered at the weekend worldwide to call for independence from La RÃ©publique du Cameroun and its francophone government. The Daily Vox attended the sister march which took place in Johannesburg at the weekend.

On Sunday, the South African branch of the Southern Cameroons Ambazonia Consortium United Front (SCACUF-SA) marched from Pieter Roos Park to Constitution Hill calling for a protected referendum to be organised and monitored by the United Nations. They want the people of Southern Cameroons, which they call Ambazonia, to be given the right to freely determine whether they want to continue in the federal union with La RÃ©publique du Cameroun or to restore the independence of the Southern Cameroons as a sovereign state.â€Ž

The region of Cameroon was shared by wartime allies Britain and France after Britain captured it from the Germans during World War I. Ambazonia refers to the southern English-speaking Cameroonian region that was administered by the United Kingdom as a trust territory from 1946 until 1961. The northern French-speaking Cameroun was colonised by the France until 1960. When La RÃ©publique was formed, anglophone Cameroonians had a choice between joining Nigeria or French Cameroun.

Ambazonia has a land mass of 43 000 kmÂ². Itâ€™s a country of six million people but the Ambazonians, who believe the Cameroonian state census is subject to political manipulation, say this number is closer to eight million. Professor Carlson Anyangwe, a retired law professor from Walter Sisulu University and leader in the Ambazonian reclamation movement told The Daily Vox the Southern Cameroons produces food for the whole region. It is rich in minerals such as gold and oil. â€œAll the food they eat comes from our territories. We donâ€™t expect them to be happy. Weâ€™re not going to allow them to have access to our resources. Those days are gone. Weâ€™ve taken full control over our territory and for them itâ€™s high time they start working hard for their own country.â€

There have been widespread internet shutdowns this year by francophone Cameroon to discourage mass mobilisation from the anglophone population. â€œIn 1961 we came together as a federal system. Since then weâ€™ve been marginalised to the point of becoming second class citizens. Over time the French, because they are the majority of 80%, decided to then form what we call a united republic of Cameroon and we got into it as a minority of 20%. Over time weâ€™re being â€˜francophonisedâ€™. Our culture is being eroded,â€ he said.

â€œWe have two legal systems. There was the common law which is the English legal system, which has been eradicated and now you expect people to come to court who are English speaking and listen to a judge who speaks in French and whoâ€™s practising the French system of law. It is impossible for you as an English speaking person to even get public service positions. We got to a point where we got tired and we said we want to restore our independence. When this protest started, students went to the streets complaining about this, teachers went to the streets complaining about this. They were arrested, they were beaten, students were taken out of their hostels and rolled in mud, some were raped.â€ A car leading the group of about 100 people to Constitution Hill filled Queens Street with Cameroonian pop music and Freedom is Coming Tomorrow from the musical Sarafina. The Ambazonians see Constitution Hill as a symbol of democracy. They hold up the South African constitution a model of what a functional democracy should look like. At Constitution Hill the mood changed from jubilation to one of defiance and reassurance. The crowd chanted â€œWe will not tire, we will not rest.â€

Milton Taka, the spokesperson for SCACUF Africa gave an impassioned speech, saying â€œThe bond between La RÃ©publique du Cameroun and Ambazonia is broken. From today going forward, it is illegal for the green, red, yellow [Cameroonian] flag to fly anywhere in Ambazonia. Only the Ambazonian flag will fly all over our land. Our people are taking their power back. From today we declare self-rule. Self-determination is an inalienable right and nobody will take that from us. Complete powers of administration have been transferred to the chief. From South Africa we are sending support to our president chief.â€

Taka was referring to Sessekou Ayuk Julius Tambe, the man chosen to be the Ambazonian leader. Tambe was voted in as the interim leader of the Southern Cameroons government during a SCACUF assembly in early July.

He said the Ambazonian people had given Tambe power to administer the land and that parliamentarians would be announced in the next few days. The Ambazonian flag represents, unity and prosperity. It features 13 starts circling a dove, a classic symbol of peace, carrying a peace-plant. Each star represents a county in Ambazonia. The white stripes represent the purity of their intentions and the blue represents the sea and the sky, hope and promise. The Ambazonians swore an oath of allegiance to the Federal Republic of Ambazonia and its constitution. With hands in the air they renounced La RÃ©publique du Cameroun and swore to protect Ambazonia from all enemies, whether foreign or domestic.

ProtestsÂ in southern Cameroon were met with severe brutality. At least seven people died and several injured in clashes with government forces. Over the same weekend, the Spanish government also responded with brutality against Catalans voting to secede from Spain. Much like the Ambazonians, they see themselves as very different from the Spanish and want the right to self-determination.

*Headline has been changed for accuracy