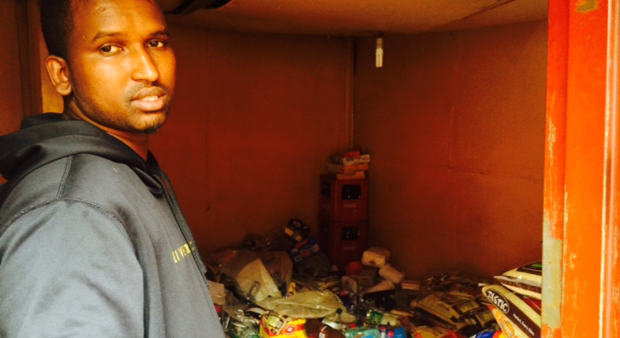 I was raised in a culture where we treat elders with the utmost of respect, no matter who they are. So last week, when I went into Mayfair to speak to Somali victims of the recent wave of looting and xenophobia in Johannesburgâ€™s southern townships, it was unspeakably difficult for me to see people my parentsâ€™ age be reduced to absolute despair, telling me that people had â€œno shameâ€ in threatening them with rape and beating them up. It was not enough that they should have their material goods and livelihood snatched away from them â€“ their dignity had to be taken away too.

â€œThe first person to ask me about anything is you,â€ said one victim I spoke to, his eyes bloodshot and his voice soft. That really stuck with me. How can it be that we have a whole community of displaced human beings, but little to no regard for how theyâ€™re being denied even basic human compassion?

Itâ€™s something that shakes you.

People showed me their stab wounds and their burn marks, the result of xenophobic attacks. One man pulled out an official form to prove to me that he was an asylum seeker. Another asked me if I could call the UN for him so he could tell them himself that he needed help from them.

Journalism, Iâ€™ve come to find, takes you out of your comfort zone and makes you aware of the privilege you have, that you take for granted in your everyday life. It shows you how people have to make huge sacrifices and take huge risks, and how a lot of the time it backfires on them and leaves them in the lurch.

I was born after the end of apartheid, so I never experienced segregation based on my race or nationality. But itâ€™s a ugly thought to consider that this is whatâ€™s happening now. On the sole basis of being from another country, innocent people are being persecuted after escaping from the harsh realities in their home countries with the hopes of finding refuge and solace in our beautiful country.

But at the rate that these attacks are going, true reconciliation seems to be a far off dream.

Reality checks are ugly things. I pray that the victims that I met, their families and others in their situation find safety. I pray that those among my countrymen who think attacks like these are acceptable find their humanity.

– Featured picture: Somali immigrant Ismaeel Adam is one of the many victims of xenophobia who sought refuge in Mayfair. By Aaisha Dad Patel.Â