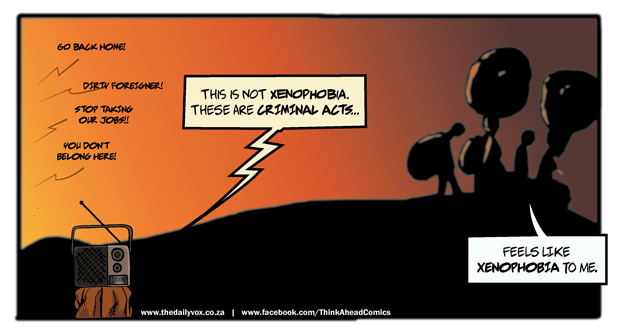 The African National Congress (ANC) has taken centre stage for its response to the recent attacks against foreign shopkeepersÂ in Gauteng. As government grapples with youth unemployment and inequality in South Africa, itÂ may have made a few blunders in itsÂ response to the violence against foreign nationals. RAâ€™EESA PATHER reports.

You know thereâ€™s a problem when someone says â€œI am not xenophobic, butâ€¦â€ Water Affairs and Sanitation Minister Nomvula Mokonyane ushered in the new year by accusing Somali and Pakistani business owners of a â€œsubtle takeoverâ€ in townships.

Mokonyaneâ€™s remarks preceded the Soweto attacks, but drew public attention in the aftermath of the violence.

â€œThe comments the minister made early in January have no bearing on the protest in Soweto and other affected areas in Gauteng,â€ the ministerâ€™s chief of staffÂ  Collin Pitso told News24.

Despite attempts to distance the ministerâ€™s statement from the violence against foreign nationals in Gauteng, the attacks brought more relevance to Mokonyaneâ€™s post. Nomboniso Gasa, a researcher who works in the field of race and gender laws, responded to the minister on Facebook, with reference to Mokonyaneâ€™s position during the 2008 xenophobic unrest in Gauteng.

â€œShe was one of the most difficult, obstrutive and defficult (sic) politicians to deal with that the time. Even getting the â€˜refugee campsâ€™ which were secured by UNHCR was incredibly difficult as she flat refused to identify land because â€˜they would not want to move outâ€™,â€ Gasa wrote.

Premier Makhura:Work with govt to remove illegal firearms among foreign nationals-don’t take law into your own hands pic.twitter.com/EnjCJ6AB4T

Following the danger in Soweto, Somalis from the township have sought refuge in the Johannesburg suburb of Mayfair. Gauteng Premier David Makhura visited victims, and said that the looting was a result of criminality and not xenophobia. Even as foreign nationals were fleeing the township, Makhura emphasised that the attacks in Soweto â€œhad nothing to do with foreignersâ€. While the attacks against foreigners in Gauteng have been criminal â€“ looting and violence is after all not condoned by South African law â€“ that doesnâ€™t mean that they are not motivated by xenophobia. â€œPeople should not think that xenophobia and criminality are mutually exclusive. Hate crimes such as gender-based violence or corrective rape are criminal, but what is the motivation? The motivation is the negative attitude towards a group,â€ Jean Pierre Misago, a researcher at the African Centre for Migration and Society at the University of the Witwatersrand, told the Mail & Guardian.

3. Tightening laws for the people who didnâ€™t loot

Although ANC representatives have condemned the looters, the party has quickly shifted its attention to address laws and policies that affect foreign nationals. â€œWe need to tighten emigration laws. It should not be a free for all,â€ ANC secretary-general Gwede Mantashe said in a speech in Soweto last week. The party also held aÂ lekgotla last week, at whichÂ Mantashe said that land policies would possibly be reformed so that â€œland ownership by foreign nationals will also be prohibitedâ€. Mantasheâ€™s statements came eight days after President Jacob Zuma welcomed â€œboth domestic and foreign business partners to invest in the South African economyâ€ at the World Economic Forum in Davos, Switzerland.

4. Foreigners are here as a courtesy

How can us foreigners be here as a courtesyâ€•We try & do things right; earn a living & work towards full citizenship? @gavdavis @MmusiMaimane â€” Gary Kerr (@RavenXV) January 28, 2015

Small business development Minister Lindiwe Zulu shocked South Africans with her statement that there will never be peace in townships unless foreign business owners share their trade secrets. â€œForeigners need to understand that they are here as a courtesy and our priority is to the people of this country first and foremost. A platform is needed for business owners to communicate and share ideas. They cannot barricade themselves in and not share their practices with local business owners,â€ Zulu said. Well, that certainly wonâ€™t perpetuate any ill-feeling towards foreign nationals.

Â  Morning Comrades, the ANC YOUTH LEAGUE call upon all South Africans to take part in the #StopXenophobia Campaign! We showed the world we were United with the #AmandlaChallenge! Now let’s show Africa that we are united against Xenophobia! Criminals are giving all of us a bad name! We will not let them succeed!!! #StopXenophobia!âœ‹ #IAMANC Â  A photo posted by I AM ANC (@iam_anc) on Jan 22, 2015 at 11:59pm PST

The ANC may be showing signs of xenophobia denialism, but the partyâ€™s younger members seemed to have found a more fitting response to the attacks. The ANC Youth League has started a #StopXenophobia campaign on photo-sharing network, Instagram.

â€œNow let’s show Africa that we are united against Xenophobia!â€ the caption on the Leagueâ€™s Instagram profile says.

Perhaps their elders could take a leaf out of their book.