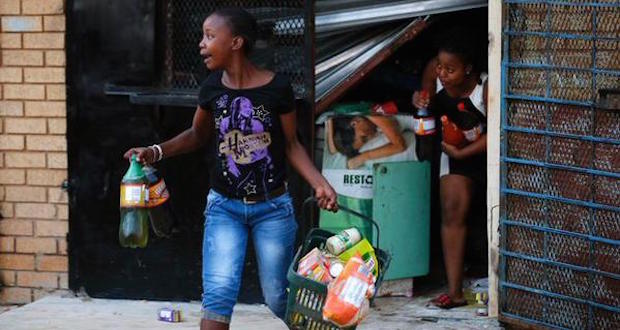 Chaos broke out in Soweto this week as local youths ousted foreign traders from their shops and looted their stock. PONTSHO PILANE asked Sowetans what they thought was at the root of the attacks, which have been labeled xenophobic by some and simply criminal by others.

Mohamed Abdurrahman Hasan, 23, shop owner, Kagiso
At 6 oâ€™clock this morning I went to open up shop as usual. In 10 minutes, a mob of about 200 people were at my door shouting at me. They were up in arms and wanted to come inside my shop, but I stopped them and told them they canâ€™t do that. Then they hit me in the head. I fell to the ground and the whole mob rushed inside my shop. They took everything, even my clothes. The police came to help me and I went to the police station trying to open a case but the policemen would not help me. They told me to go away. This has been traumatising. Itâ€™s a nightmare. Noluthando Mashiqa*, 36, promoter, Noordgesig
I am very double-minded about the attacks happening in Soweto. On one hand I think it is right for them to get looted because the foreigners did kill someone and that is wrong. The shop owner did not know why the kid was trying to rob him, maybe he was just hungry. He [the shop owner] should have disciplined him [the boy], maybe by hitting him but not to end his life. But to have people violently remove them from their businesses and steal is also not right. These Somalis need to go back home: they are too comfortable in South Africa. Aaron Ledwaba*, 50-something, cab driver, Protea North
My son was one of the looters in our community. His mother and sister were very supportive of his actions, but I condemned them. He brought back some food from the shop and we ate it. I was worried that he would get arrested and end up locked up. I donâ€™t think it is right what is being done to the foreign shop owners â€“ these people are very helpful in our communities. They sell things at a better price than any other place around us. Just yesterday, my daughter was complaining that there was no bread and I should come with bread from work. Had they not looted the Somalis, it would be easy to get bread. Itâ€™s a shame that we are so angry towards people who make our lives better. Yoliswa Themba*, 46, florist, Meadowlands
It is right that these foreigners are being chased out of the townships, but the manner in which it is being done is wrong. We should not be violent and aggressive. We should give them three months to pack up and go back home. I am a South African and I am barely surviving and now these shop owners are making it harder. I have stayed and suffered in my country, they should do the same thing. I donâ€™t like them, but I have to admit that their prices are cheaper and thatâ€™s perfect for us â€“ but I am tired of them.

Lerato Modise*, 31, unemployed, Dobsonville
I saw some of the lootings happen and I could see the hate in peopleâ€™s eyes. All they wanted is to hurt the foreign shop owners. I was also threatened because I tried to stop some of the people who supported the looting. I think itâ€™s disgusting that this is how we treat our fellow Africans â€“ especially when their countries are worse off than South Africa. One of the looters said that I must be whoring around with the Somalis and that is why I am on their side. They just want to be violent and destructive and they are hiding behind â€œjusticeâ€. I wish I didnâ€™t live in Soweto.