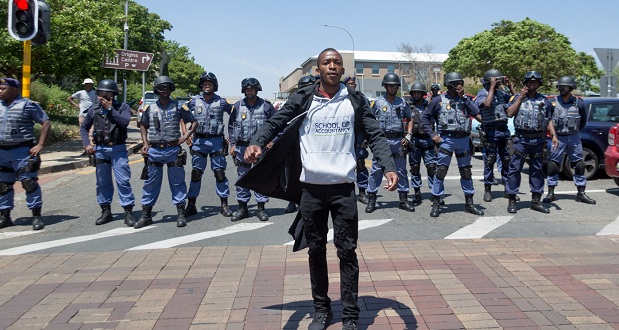 Last year this time, the Fees Must Fall movement was gaining momentum, barrelling towards a triumphant mass march on the Union Buildings, where it would eventually win concessions from government including no fee increases for the following year. This time around, the movement is coming apart at the seams. Campuses are burning, security police are prowling, and student leaders have been arrested. Where did it all go wrong?

You might say it started with the burning of a bus in Braamfontein, or when students at UCT assaulted their vice chancellor. You could go back further, to when police used stun grenades and rubber bullets to disperse students on campus, or to the first incident of rock throwing at Wits.

The physical violence of this yearâ€™s protests have been top of mind for many but these are just surface manifestations of a deeper problem with the Fees Must Fall movement – its incoherence.

In 2015 the demand was simple – a zero percent increase in fees and a commitment to free, quality education.

Consider the number of universities affected by this yearâ€™s protest – at least 16 by our count – and the diversity of their demands, which include everything from free education to the removal of police and private security on campus, an end to outsourcing, the pardoning of suspended and expelled cadres, the cancellation of student debt, tampons and sanitary towels, wifi for students in residences and transport for those living off campus.

Last year, student leaders at Wits provided the kind of leadership that inspired, even though the end of the protests brought allegations of these same leaders selling out to government. This year, the political splits within the Wits leadership are much deeper than just party political affiliations. Even the objective of the protest is an issue of dissent, as some student leaders have called for the removal of President Jacob Zuma and the ANC from office. Others seek to work within the current system to force the democratically elected government to cede to its demands. And in between there are rabble rousers, who seek disruption for the sake of it.

Look away if you must but weâ€™re going to quote Adam Habib now: â€œEvery social struggle has various conflicting interests,â€ he said. And heâ€™s right (on this point).

Student leadership this year has been unwilling to compromise, demanding that the university remains shutdown until government commits to a timeline for free education – a near impossible demand by any reckoning.

The university has taken a hardline stance, bringing additional private security onto campus and giving police full operational control, a position that has served only to harden studentsâ€™ attitudes, provoke fear and hostility, and escalate violence.

Meanwhile, government has reverted to its default position of police brutality and intimidation by state security, with residences raided, student leaders rounded up and some arrested on what appear to be trumped up charges.

Among all this, it is easy to lose sight of the root causes of the conflict.

At the heart of these protests are black youth who continue to struggle to imagine a future unencumbered by the burdens of a history of disadvantage. It is as true of last yearâ€™s protests as it is this year.

Take Thembelihle Khumalo, an 18-year-old from the village of Tugela Ferry in KwaZulu-Natal, who was raised by a widowed mother and granny, both of whom are unemployed. Despite the family losing everything they owned in a flash flood in 2013, she managed to pass matric – one of just 36 kids in a class of 97 – and was accepted to study teaching at Wits. She arrived in Johannesburg with no plan for funding her studies, and moved in with an aunt in Thembisa – a township that is a 45-minute commute from the university.

Thembelihle was given three months to pay off her registration fee after receiving a waiver. Sheâ€™s applied for a NSFAS loan and several bursaries but has yet to hear back on these. â€œFor now NSFAS seems like my only hope,â€ she says. â€œWits has been my dream though and Iâ€™ve always loved it â€“ I did a lot of research, so I hope that Iâ€™ll be able to have the chance to stay here.â€

A Daily Vox reader was touched by her story, and arranged a bursary for Thembelihleâ€™s tuition. It should not take a story in the media for a poor, black person to be able to afford higher education.

The Fees Must Fall protests are about the ongoing struggle of black youth, like Thembelihle, to secure a future unencumbered by the burdens of a history of disadvantage. The legitimacy of these protests cannot be doubted; however, the sheer number of localised demands at each university has diluted the core issue.

Dodgy tactics all round

But itâ€™s not only the lack of a singular message, and a unified movement, that has set the Fees Must Fall movement back this year. The violence that has accompanied these protests has alienated many supporters off campus.

The vandalism and arson that has occurred on campuses must be condemned, and the law allowed to take its course in dealing with the perpetrators.

Some student leaders have denounced the violence while others have encouraged it, some have been vocal in condemning arson but remained silent on the issue of rock throwing. This, too, shows a lack of coordination and poor messaging on their part.

Meanwhile, the increased militarisation of campuses has escalated the violence and affected protestors and bystanders alike. In addition to protesting students, clergymen sheltering fleeing kids, lecturers waiting to teach classes, and support staff going about their day, have been hit by stun grenades, tear gas and rubber bullets.

Communications from university management on the protests have been tone deaf, with statements focussing on damage to infrastructure, arrests made and how the academic programme will proceed. They have avoided mentioning the broader impact of heightened security on the university community, despite reports of the violence enacted on students and staff, and the psychological effects theyâ€™ve suffered as a result. The academic programme may be proceeding but the kids arenâ€™t alright. Governmentâ€™s decision to treat the protests as a security matter, and to implicate a third force in recent events, rather than to grapple with the key demands of the movement has further alienated students.

Several students have complained of police intimidation. Last week, student leaders were rounded up and arrested. One student was stopped while driving, surrounded by seven police cars, and allegedly arrested at gunpoint. His lawyer was told that he was suspected of being in possession of petrol bombs, but also that there were questions over his car registration papers. He was held for four hours during which time, he says, police interrogated him over his involvement in Fees Must Fall. He was later released without charge.

And then thereâ€™s the racism

Underlying all of this is the seething racism that exists in South African society, and the idea that the status quo, in which poor black people must simply accept their historically designated place in society, must be maintained. You need only read the comments circulating on social media to get a taste of the deep hatred for poor and black people that continues to exist in South African society, a hatred that needs nothing more than the image of a student throwing a rock or a video of a single ill-informed personâ€™s comments on science and colonialism, to delegitimise an entire movement – and brand everyone involved as uneducated thugs.

Fees Must Fall 2015 left most onlookers feeling invigorated. The 2016 vision is nothing less than a demoralising dystopia.

The only way through this quagmire is for all sides to commit to disarmament, to letting go of their greatest weapons. Students must surrender the call for a total shutdown of campuses (a move that will cause untold chaos for higher education students), universities must call off the private security guards and police who patrol those campuses, and government must send police and state security back to whatever they were doing before the student protests began. Only then can the movement building and the long, hard negotiations required for free, decolonised education begin in earnest. Without these, the Fees Must Fall protests of 2016 will continue to devolve into a pointless circus of rock throwing, teargassing, intimidation and arrest.