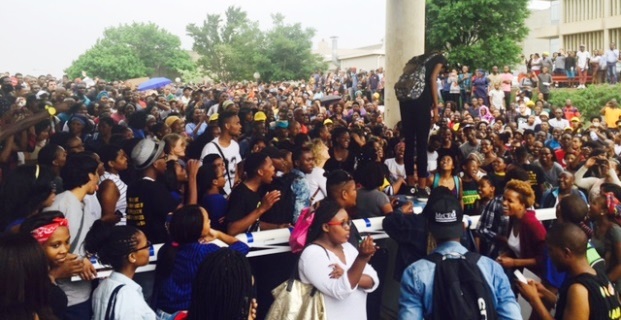 The ongoing protest against fee increases at the University of Witwatersrand is not about the whim and fancy of students who feel entitled to a free ride. It is about the ongoing struggle of black youth to secure a future unencumbered by the burdens of a history of disadvantage.

Let’s be honest here. The proposed 10.5% fee increase at Wits will marginally inconvenience those who are able to afford higher education anyway. But itÂ will be catastrophic for others, especially for black students from disadvantaged families who are already struggling to afford a university education for their children. It will force the exclusion of poorer students from the system, further entrenching inequality.

As students barricaded the gates of Wits yesterday, NSFAS was telling parliament that despite rolling out more funding, fewer students have been assisted due to the rising cost of tertiary education. NSFAS chairperson Sizwe Nxasana says despite a R3-million increase compared to the last financial year, the scheme funded 1,300 fewer students this year.

And the shortfall of state funding to tertiary institutions goes beyond NSFAS.

According to media reports, Universities South Africa, which represents higher education institutions, has complained that the current financial yearâ€™s equitable share to universities from government â€“ which is R22-billion â€“ was still about R12-billion short of the R36-billion they need to meet all their financial needs.

It is impossible to address inequality when universities are perennially underfunded. But it is especially damning to place the burden of shortfall on students.

In the words of Rhodes vice-chancellor Sizwe Mabizela, â€œUsing student fees to address the financial shortfall in higher education creates a significant financial burden for students who come from poor, rural and working class communities as this makes higher education unaffordable.â€ And while there have been expressions of solidarity with the protesters, there has also been great disdain for the protestors.

The protesters have been made out to be violent when the protest has been anything but violence. More violence has come from people trying to force their way past or through protestors. And yet, The Star, for example, headlined their story about the protest as students being on a rampage. One definition of a rampage is â€œviolent or excited behavior that is reckless, uncontrolled, or destructiveâ€. But the Wits Fees Must Fall protest has not been characterised by recklessness or destruction.

The perception then, that students who protest fee increases simply feel entitled to free stuff and will resort to violence if they don’t get it, must be quashed. There is no recognition of the fact that mostly poor, black students who are steadily making their way through university will be consigned to a life of struggle if fees increase and they’re forced to drop out, while the previously advantaged, mainly white students simply continue merrily on their way.

Meanwhile, the immediate focus of many news reports regarding the protest has been on how it is affecting Johannesburg traffic.

Some people will talk about bursaries and academic excellence, but how is it fair that well-off students averaging results in the 50- and 60-percent range can go on to get their degree because they can pay fees due to their family’s history of privilege, while only the hardest working and smartest disadvantaged students, with the best support structures, become eligible for bursaries, for which there is stiff competition?

This plays into the idea that black people have to do things twice or thrice as well as white people to achieve the same goals. And you’re just supposed to suck it up.

The studentsâ€™ protest is a robust idea. It may not yield immediate results. It may fizzle out under the strain of its own toil or fall prey to internal, campus politics. It may also hold contradictory values. But it has taken students once more to show us the faults in the present day South Africa, that they must carve a future from, for themselves, yes, but also for the rest of us.

This protest is about a South Africa in which young people are still struggling to be free.

Enjoyed reading this? Please help us to keep doing what we do by donating to our crowdfunding campaign here.

International men’s day? For who? For what?

Editorial: My heritage is the heritage of the not-good-enough