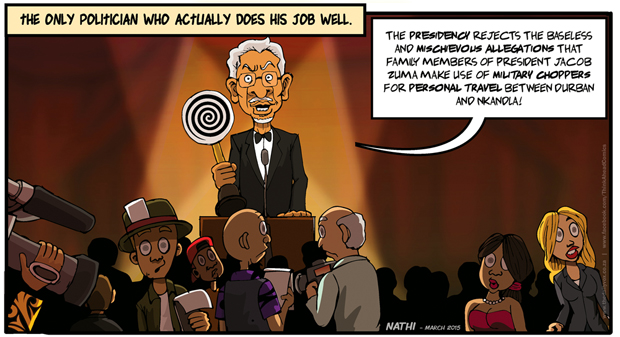 Amid incompetence and a lack of qualifications, itâ€™s quite refreshing to find a politician who can do theirÂ job well â€“ and not just well, but super-well. Spokesperson for the Presidency, Mac Maharaj, certainly fits the bill, as he leaves journalists â€“ and the public â€“ spinning with his constant statements defending President Jacob Zuma.

Most recently, heâ€™s denied that the presidentâ€™s family uses military helicopters for travel between Durban and Nkandla, but this is just his latest salvo. Earlier this month Maharaj was as busy as everÂ Â â€œclarifyingâ€Â Zumaâ€™sÂ teen mom comments. Over the years heâ€™s had the presidentâ€™s back on matters ranging from NkandlaÂ to ill-thought out statements, such as: â€œWe mustnâ€™t think like Africans inÂ Africa.â€

Mac, you may make journalistsâ€™ livesÂ harder (itâ€™s quite tough having to read between the spinning lines), but thatâ€™s your job, and itâ€™s only fair to acknowledge that youâ€™re a grandmaster of spin.