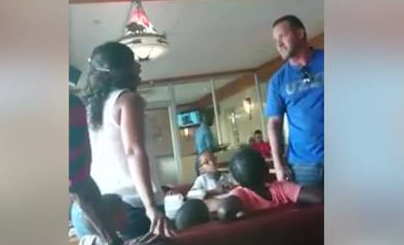 Weâ€™ve all seen that Spur video, and everyone has plenty to say about it.

On Tuesday,Â the franchise released a letter on their Facebook page discussing what had occurred and what they were doing about it. Possibly responding to some of the criticism people have posted on social media, the letter states that the Texamo Spurâ€™s staff had tried to intervene but were â€œpushed away numerous times by the angry male customer.â€

It doesnâ€™t look that way in the video. In fact, the video shows almost no intervention whatsoever by any member of the restaurantâ€™s staff. The only heroes in the situation are Lebohang Mabuya and an unidentified man in a striped shirt standing up to a guy twice his size.

The statement went on to say that Spur was â€œshocked at the adults for behaving in the manner they did, especially with so many children around. As a family restaurant, Spur does not condone this type of behaviourâ€¦ As soon as the incident escalated, Texamo Spur staff notified The Glen Shopping Mall security.â€

When exactly did the situation escalate? When he started screaming, when he lunged at her or when he shook a table full of children? Why is the blame being addressed to both parties as though they were equally at fault? Does Spur management not recognise the obvious racism, misogyny and violence occurring in their branch? Is this yet another example of white male privilege in South Africa?

If it was a black man doing that, I swear it would’ve been taken to a whole new different level, maybe get arrested right there. #spur

Spur has apparently banned the man from ever entering the establishment again,Â but how effective is this ban considering that his identity had not been made public and staff changes are a constant within the restaurant business? Whoâ€™s going to remember (or care) about this guy in two months? Why was Mabuyaâ€™s name noted, and not his?

So how is #Spur going to prevent that big entitled white guy from entering any of their branches exactly? He must be arrested and charged

This incident isnâ€™t the result of bad manners, or staff not being trained to deal with violence, or kids misbehaving. Itâ€™s because white men in South Africa cannot cope with not having their every whim catered to. The incident is a reminder that the very relationship that white men have to black women is loaded with a history of racism and sexism, and that this history must be considered in every instance.

What happened at Texamo Spur is not the result of helicopter parents behaving badly; itâ€™s far more complex than that. This unnamed man told her that he would give her a â€œpoes-klap.â€ That means more than a black woman screaming â€œfuck you.â€ White male privilege and aggression is real, and it was abused. This is not something that can be solved by banning a man from a restaurant.

The least that Spur could have done was be honest and be critical in their statement. We canâ€™t hold a black woman – a victim of obscene aggression and abuse of power – to the same standard as the white man who threatened her. We cannot throw trivial â€˜punishmentsâ€™ out to save face as an establishment. Spur needed to, and still needs to, offer an apology for their lack of action, offer Lebohang Mabuya compensation for her experience, and make a commitment to do all they can to see that this man is dealt with according to the law. If South Africa is ever going to see an end to these incidents of racial and sexualised terror, we need to have an appropriate and working model of dealing with racists, with misogynists and with men who scare children. Not statements filled with empty rhetoric.

Banning that man from #Spur is not the solution. It still doesn’t resolve his anger issues. Imagine your kid bumping into his kid at Wimpy.