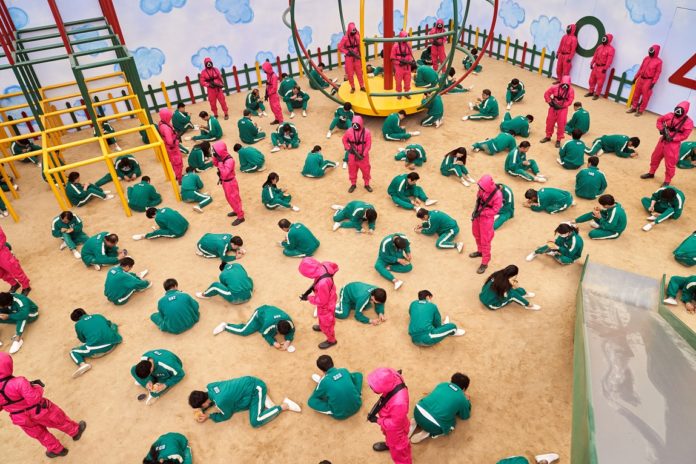 Netflix’s Squid Game was watched by 111 million users in its first 28 days. The deadly show is a far-cry from the glitz and happiness of K-pop and K-dramas. We binge-watched the show and have a spoiler-free review for you.

Squid Game is a nine-episode series about a world where children’s games get twisted. A group of indebted people in South Korea are invited to play in a tournament of children’s games. There is a huge cash prize of 45 billion South Korean won, ($38 million) at stake. The catch is that you lose your life if you lose a game. This may not be a show for everyone. The violence seems to escalate with each new episode.

The main character is Seong Gi-hun (played by Lee Jung-jae). He is a divorced father of one who gambles, and struggles to pay child support. Migrant worker Ali Abdul (played by Anupam Tripathi) is endearing,and the most morally intact player. He just wants to be able to support his wife and child. We also cannot stop thinking about street-smart pick-pocket Kang Sae-byeok (played by Jung Ho-yeon). She is desperate to get her brother out of an orphanage and her family across the border from North Korea. There are many other characters who give memorable performances.

But this is a spoiler-free review, so you better go stream it if you want to know more.

The show masterfully weaves in each character’s back stories without pulling you away from the current happenings. When the games are played you are on the edge of your seat or bed. I let out a shriek a few times while watching. Technically the show’s editing is as sharp as a knife’s edge. The use of bright colours in costuming alludes to the carefree and strikingly happy days of childhood.

As deadly as the show is, you cannot stop watching. You want to see how characters die, and how their values are tested. The seduction of riches and being debt-free is so palpable. Each time they move onto the next game, more money drops into a glass piggy bank filled with cash. The final two episodes reveal many truths, and answers to why this tournament even exists.

In episode one, the players play Red Light, Green Light. In Korea though, the game is known as Mugunghwa kkoci pieot seumnida. This translates to “the hibiscus flower has bloomed”. Players are only allowed to move when the song stops. In the show the voice comes from a giant robotic doll. A universal game that is played in the show is Tug-of-war. In South Korea it is known as Juldarigi and was traditionally played to bring communities together. The game was mostly played around harvest time. Players were usually divided into ten person teams. If we say anything more about the games we may spoil the show. So let’s just look at this gif right here and watch it all unfold in episode four.

Where the show is based in reality

South Korea has a growing inequality and poverty-stricken elder population. Household debt has doubled over the past decade, and many self-employed people have lost their income. Middle-class folks cannot afford housing amidst rising  property market and apartment prices. Nearly one in ten South Korean youth are jobless. While over 40% of people over 65 are affected by poverty.

Presidential candidate Lee Jae-myung, vowed to roll out a universal basic income (UBI), if he wins the election. A UBI is a guaranteed payment each citizen receives from the government.It is to provide enough to cover the basic costs of living.

Racism is also a major problem in South Korea. According to a survey of 310 foreign residents in 2019, almost 70 percent experienced racial discrimination and exploitation. This is especially true for undocumented migrants as Ali shows in the series.

The only thing remotely nostalgic for childhood in Squid Game are the games. Although that is even skewered by its harrowing redefinitions. The show is a ghoulish reminder of the lengths desperation can push you to. It also shows us that beneath the polished surface of any society, grime and dirt always looms. The show is thrilling, scary, sad and mostly relatable especially living in South Africa. It is entertaining and we give it a 7/10. The violence is gratuitous, but maybe that is the point too. The show is ultimately about ordinary people’s morals being tested to entertain privileged others in a capitalist society.

PS. Use “English” rather than “English CC” subtitles for a better and nuanced translation.