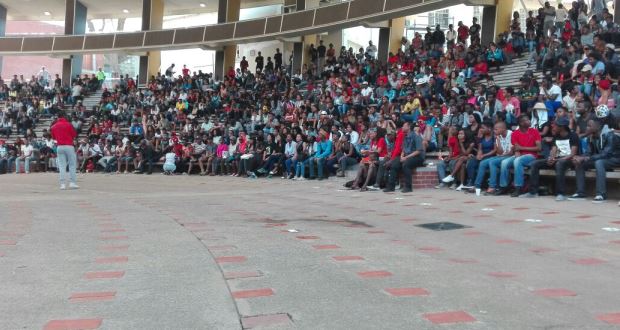 Students at the University of Pretoria (UP) disrupted SRC elections and academic activities on Tuesday and Wednesday, but their actions have been marred by political infighting. Lebo Lebese and Khethiwe Mbongwa round up what went down.

On Wednesday morning, students continued protesting, despite a reminder from the university that an interdict against protests remains in place, and a warning that students and staff participating in protests would be served with letters of suspension.

The university has since shut down all academic activity, with plans to resume on Monday, 26 September.

Academic programmes in all campuses will resume on 26 September 2016. Regular updates will be posted on UP website, UP portal and ClickUP.

Students planned to go around campus and disrupt business activity on Wednesday. By Wednesday afternoon, they had a meeting at the amphitheatre to discuss a memorandum of demands that had been drafted on Tuesday, and it was reported that some students have been issued with suspension letters.

The protests began on Tuesday morning, which was marked as an SRC election day. At about 9am, students began disrupting the elections, and moved from main campus to the satellite campuses.

Protestors disrupted classes and pulled students out of lecture halls and tests. Members of the EFFSC and PASMA disrupted one of the voting stations, in a bid to stop election processes until management addresses them on the national fee increase.

There was a heavy police presence on campus, included mounted police and police vans. A protesting student is alleged to have been assaulted by a security guard. Protestors called for vice chancellor Professor Cheryl De La Rey to address them within 30 minutes; when she did not arrive, disruptions continued. By Tuesday afternoon, students from the Tshwane University of Technology had made their way to the UP campus in a show of solidarity.

Students reconvened in the Student Centre for an address, and a memorandum of demands was presented. The demands included free education, for the names of university newspaper (Perdeby) and radio station (Tuks FM) to be changed, and for the removal of Perdebyâ€™s editor-in-chief, Carel Willemse.

Students at #UP have drafted a memorandum of demands, not yet clear who it is addressed to or if it will be delivered. #FeesMustFall2016 pic.twitter.com/v3t6WlxoAW

Another meeting was held in the Student Centre at 6pm to discuss a way forward. There has been a lack of clear leadership in the protests so far. Student leaders from EFFSC, PASMA and their affiliates say there is a flat leadership structure, with no characteristic head. They claim to have adopted guerrilla tactics to disrupt the university and to confuse and evade police and campus security.

There appears to be a power struggle underlying the protests, with various groups accusing each other of sabotage and of running smear campaigns.

Students at the meeting, apparently dissatisfied with Sascoâ€™s leadership, set a Sasco t- shirt on fire. Sasco leaders told students they had been misunderstood and blamed classroom disruptions on EFFSC members who they say have been posing as members of Sasco. Meanwhile, students remain pinned between an unresponsive university management and competing factions from among student leadership.