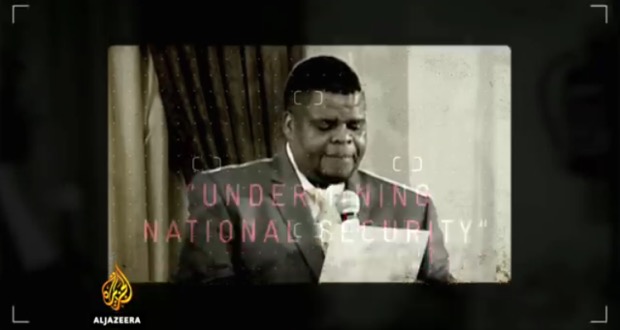 An Al Jazeera investigative documentaryÂ has named South African Minister of State Security David Mahlobo as a key member in a rhino poaching syndicate. The documentary – Poachers Pipeline: Dealers, Diplomats and the Illegal Horn Trade – alleges that the minister has a relationship with Chinese poachers involved in illegal rhino poaching in Africa.

In the documentary, alleged rhino horn trafficker Guan Jiang Guang, a Chinese national, names Mahloboâ€™s wife as one of the key players in the trade, saying that he does not do business with the minister directly but knows him personally, showing pictures with Mahlobo to prove so. â€œ[Business is only done with] his wife. He doesn’t do any business. Whenever there is a big project, his wife is out front. He is behind the scenes. It’s very common in South Africa that the wives are doing business and the husbands are acting officially. If anything happens, they will mention their husbands name. Officials will never do business in their own name.”

It was also alleged that his wife did business deals on his behalf while he was more â€œbehind the scenes.â€

Early on Monday, Mahlobo told SAFM host Sakina Kamwendo that he â€œdefinitelyâ€ intends on taking legal action against Al Jazeera, and that justice should be allowed to take its course. â€œI’m not above the law. The allegations are very serious. I’ve spoken to the police commissioner and we’ve launched a formal enquiry into them.â€

In any country Mahlobo would be toast, but like Msebenzi and their boss JZ nothing will happen.

He also defended his wife, saying she never did any business deals. â€œEven at the time when the matter is breaking up my wife is never in a position to do any business. It is actually very unfair and upsetting that allegations should be made to damage the image of myself as a person.â€

Mahlobo told Kamwendo that the picture Guan shows in the documentary of the two together is of Mahlobo getting a manicure at the spa. The minister said that it is the job of â€œministers and celebritiesâ€ to meet people, and that he was frequenting the spa around 2009, before he became minister of state security in 2014. â€œI don’t even know this name,â€ he said of Guan. â€œI happened to go to a Chinese spa where this fellow was one of the people hanging around. I’m not a person who goes to people’s homes, I’m very discreet. That man, I don’t know where he stays. He doesn’t even know where I stay.â€

“I take pictures all over the world. Does a picture actually demonstrate a connection?â€

Speaking at the Institute for Security Studies on Monday afternoon, Mahlobo reiterated his disappointment in how the allegations have been sensationalised, calling them â€œfar-reachingâ€ and â€œfrivolous.â€

Mahlobo said they place his personal integrity into question.

â€œRemember, I am a leader in government. It puts the cabinet of President Zuma under disrepute. I am also a member of the ANC, a member of the National Executive and Working Committee of the ANC and my organisation, we are causing damage to it. Remember, I have kids, I have a family and it is very very unfair,â€ he said.

He added that the allegations against the Chinese president’s delegation put international relations between South Africa and China in jeopardy.

South Africa has the largest population of rhinos worldwide and plays an integral role in rhino conservation.

According to statistics compiled by the International Union for Conservation of Nature (IUCN) and the Species Survival Commissionâ€™s African Rhino Specialist Group (AfRSG) a total of 1,175 rhinos were poached in South Africa during 2015.

Is the State Security Ministry captured?

This is not the first time that a state security minister and his wife have come under fire for allegations of involvement in trafficking. In 2011, then State Security Minister Siyabonga Cweleâ€™s wife Sheryl was convicted for drug trafficking.

The two were later divorced.

Sheryl Cwele and Frank Nabolisa, her co-accused, were both sentenced to 12 years of imprisonment for using drug mules to smuggle cocaine into South Africa. Cwele famously said that he had had no knowledge of what his wife had been doing.

In a statement issued on Monday, Mahlobo said that, in addition to asking the provincial police commissioner to investigate the allegations made against him, he has requested that the commissioner take action against Guan for illegal rhino poaching activity and that they look into the claims by Guan that he employs illegal immigrants and circumvents immigration laws.

The state security ministry added â€œthat it will continue to work tirelessly within the security services as part of the governmentâ€™s effort to curb transnational organized crime and bring to justice those involved including their syndicates.â€

Editor’s note: This story has been updated with Minister Mahlobo’s comments at the Institute for Security Studies presentation.

Featured image: screengrab from the documentary